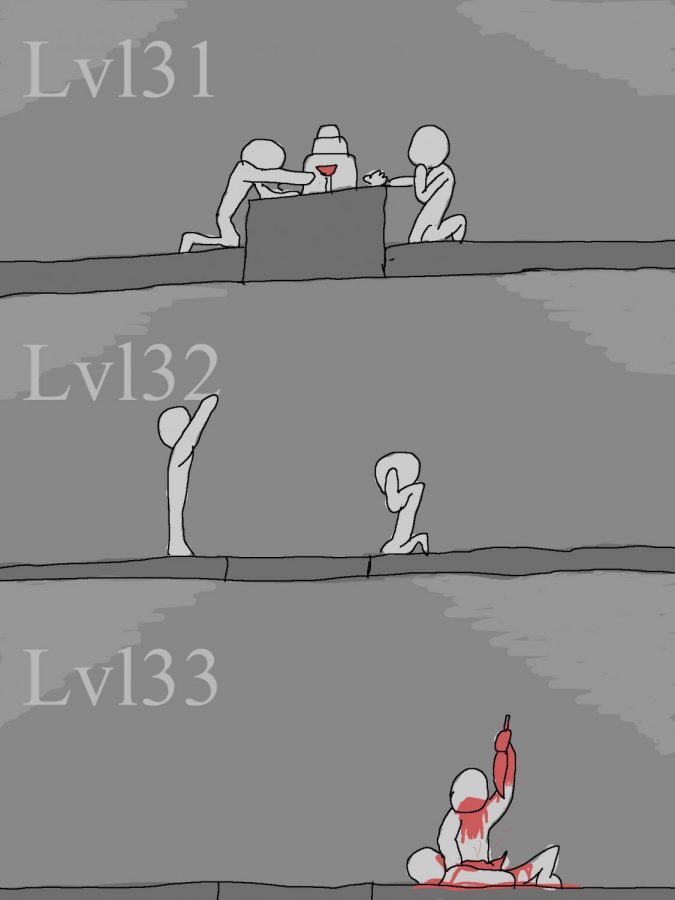 Some of us would never eat food if someone else took a bite or even touched it, right? Well, what if countless others took a few bites only leaving a sliver left on the plate? Still, no right? How about that’s the only food you get for the rest of the day? And that’s how it’s going to be for a while? That small bit of bacon and that egg covered in spit doesn’t look too bad does it? Well in the movie, The Platform, we follow an inmate as he voluntarily enters prison with such a premise. But is the movie any good?  It’s a very heavy film for some people.

The Platform follows an inmate living in a prison called the “Pit”. The premise of this prison is that it’s a vertical prison with each floor being a cell with two inmates with a hole down the middle of each cell. Once a day, there is a banquet of food placed on this platform that goes through the hole of each cell. However, with the inmates being closer to the top, they eat more than their fair share leaving scraps for the rest and nothing for those at the bottom.

The main character is forgettable, but the cast as a whole really do their part to deliver home the message. There are some standouts such as Zorion Eguileor’s character that brought an interesting, “Hannibal Lecter” vibe to the whole thing. Other than that, it’s only a few levels higher than your normal horror movie cast.

However, the real star of the show is the “Pit.” It’s not sentient but the way the setting feeds into how the characters live and act makes the prison itself feel alive and benevolent. Additionally, it really keeps you on your toes on how many floors this place really has. Numbers keep being thrown around and as the story goes on, there seem to be more and more floors and with them, more and more levels of how far humankind can go in terms of madness and selfishness.

Finally, to address the elephant in the room, which is a social commentary on the social hierarchy, gluttonous behavior that extends beyond food, climbing the social ladder and forgetting where you came from, and overall reality versus expectation. It’s all a bit heavy-handed at moments but when you start getting tired of the social message, the movie breaks it up with some dude being stabbed and then getting eaten. Therefore, the social message doesn’t overstay its welcome too much.

The movie is violent and not just in the ways you think. There is some freaky imagery that’s not only even about blood and gore, it shows some nasty and melancholy images like some dude eating maggots off a dead body that’ll destroy your appetite and leave you wanting to take a shower.

Overall, this movie isn’t for everyone, for those with weak stomachs or hate horror and gore centric movies, run the other way. But if you like these types of movies or can endure some heavy-handed social messages, well this movie is for you. Give it a watch on Netflix and prepare some bacon and eggs that you’ll probably never finish.