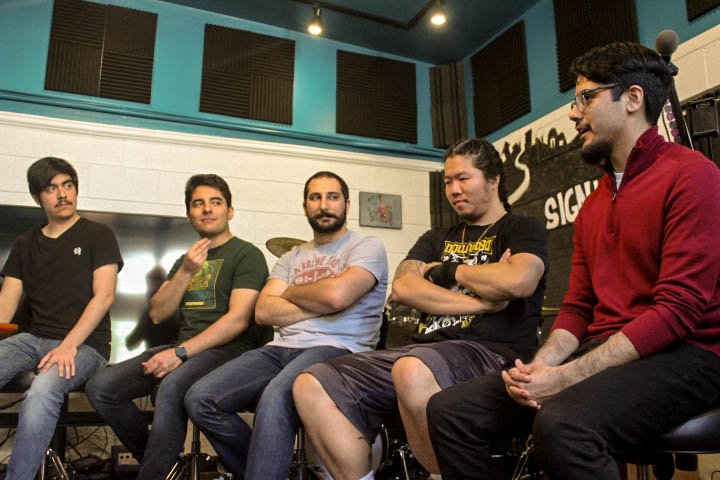 Sign Hill, a South San Francisco-based band is just at the beginning of their musical journey after 10 years of friendship and a year of preparing to take the risk of becoming full-time musicians.

Sign hill is composed by lead singer Nelson Ramirez, drummer Victor Ramirez, and bass player Edwin Ramirez who are all brothers and are also joined by their two guitar players and good friends, Joey Chow and Jamil Khoury.

Their story starts at El Camino High school in South San Francisco 10 years ago. Chow, Nelson Ramirez and Khoury met during their freshman year and a year later, Joey met Edwin during their Spanish class. Even though they met and knew each other, they weren’t friends yet.

“It was like two different groups that came together and formed one band, it was more like me [Jamil] and Joey meet the Ramirez brothers,” said Khoury.

Jamil and Joey were “best buds” at the time and they even had their own band called Ikolopolous. The friendship between the Ramirez brothers and Chowstarted to grow when they collaborated with each other for musical projects like symphonic band, red man group, as well as drumline in high school.

They drifted apart after high school, but collaborated with each other on a small school project for Victor Ramirez which reconnected them after he finished his studies at College of San Mateo.

They reconnected but didn’t have any plans on forming a band together. It wasn’t until Christmas of 2017 when they thought to play together while they were at Joey’s house playing Rock Band. They were all very active in music throughout high school so they had the skills and knowledge to play real instruments with each other.

This lead them to invest in Edwin Ramirez’s first bass and Nelson Ramirez’s first guitar and they decided to learn to play these instruments with the help of Chow and Khoury who had more experienced with them.

“It was formed then, unspoken, then it just became a thing, then we started to acknowledging it after a while,” said Khoury.

The decision to form a band together had been an unspoken agreement between them due to their natural chemistry with music and personality. But in January of 2018, while they were playing together one day, they stopped to realize how their styles and music clicked between them so smoothly that it felt and sounded like a band.

“It became officially formed at some point when we finally picked the f****** name, which took so long,” said Nelson Ramirez.

The name took about six months to pick according to Sign Hill members. Sign HIll is an actual hill that looks over South San Francisco. This hill was created in the 1920s and is listed in the National Register of Historic Places, but for Edwin Ramirez, Nelson Ramirez, Victor Ramirez, Chow, and Khoury, this hill represents something much more.

“I liked the idea that we can all see all of our homes from the top of Sign Hill,” said Edwin Ramirez. “I figured it was a nice literal sense of saying that this is where we all met. This is our home.”

There is also a creative side to the name. Edwin Ramirez said that Sign Hill would be this imaginary place that they would write songs about. Where this hill looks over a fake world and they play these fake stories of things that happen in it.

Sign Hill has officially been a band for a year. They are young but they are certain that creating music is something they want to experience together and make a living off of. This first year as a band has been about creating a good foundation musically and financially for a good start.

For starters, they decided that they wanted to have their own studio so they can be more independent and don’t have to rely on label companies to record high-quality music. They started building their studio in July 21, 2018 and ended at the end of September of that same year. This was all done with the help of friends and family who have been very supportive of their passion for music.

In this studio, they record songs and covers with the help of friend Neil Swanson who is co-audio engineer for the band. Swanson met Victor in 2015 at CSM while they both were studying to get their associate degrees in electronic music. He would later meet the rest of the band in 2017.

Music has been a part of their lives for a long time and they have all been inspired by different bands and genres like Arctic Monkeys, Red Hot Chili Peppers, Rise Against, The Faceless, punk rock, heavy metal and many more.

“We want to take something from the respective genres that we all listen to and somehow merge them together,” said Edwin Ramirez.

This has been a plan of theirs: to mix everything they like together which has lead them to have an original sound. Edwin Ramirez confessed that creating original content was frustrating, yet intriguing to them because they couldn’t find anything that was similar but this gave them the motivation to keep digging into their creativity because it was new and different. They are looking to incorporate electronic background to their music with the collaboration of their friend Neil Swanson who knows more about that genre.

Music isn’t the only thing they do. They have other priorities that they have to attend to on a daily basis like school or work. Edwin Ramirez is in grad school studying artificial intelligence and statistics, Chow is an electrician in the city of San Francisco, Khoury is in undergrad school at San Francisco State University studying astrophysics, Nelson is a software engineer and is working at a tech start up and Victor Ramirez is in undergrad school at SFSU studying music and he got an associate degree from CSM in electronic music.

“Us going to school is the backup plan, that is how we want to fund the band,” said Edwin Ramirez. “We want to pull our money together and save up. We know that with the jobs we have, we will be able to get enough substantial amount to do this for a while or to take the risk to do it.”

The thing about life is that no one can prepare you for it, one can only be as prepared as possible. Sign Hill has their education to rely on as well as each others’s backs.

“We have all shared similar experiences, whether it was that either you had to go through and figure who your real friends were to the point that we all experienced at the same time that ended up converging us all at once, like ‘Hey, we don’t want any of this bulls**t we just want transparency and an actual friend to be there.’ We are in this together,” said Nelson Ramirez.

Their friendship is essential for this band and being honest with each other when it comes to band issues and personal issues is important for them to share. Victor Ramirez stated that they have a simple system where they express and share any feelings or disagreements that they may have with each other. They have made it a safe space to be honest with each other in a respectful manner without hurting each other because that is not their intention as friends and as family.

“It’s very versatile. It’s good that they are all into different styles because it brings a lot of elements into the writing process,” said Jenyce Garay, who is Khoury’s long-time girlfriend.

Friends and family are excited for Sign Hill’s future and are looking forward to what they will achieve together. For the summer, the band is planning to make some videos and book some gigs in the city that they will announce on their instagram page: @signhillofficial.