From The Ground Up: A look into coastal farming 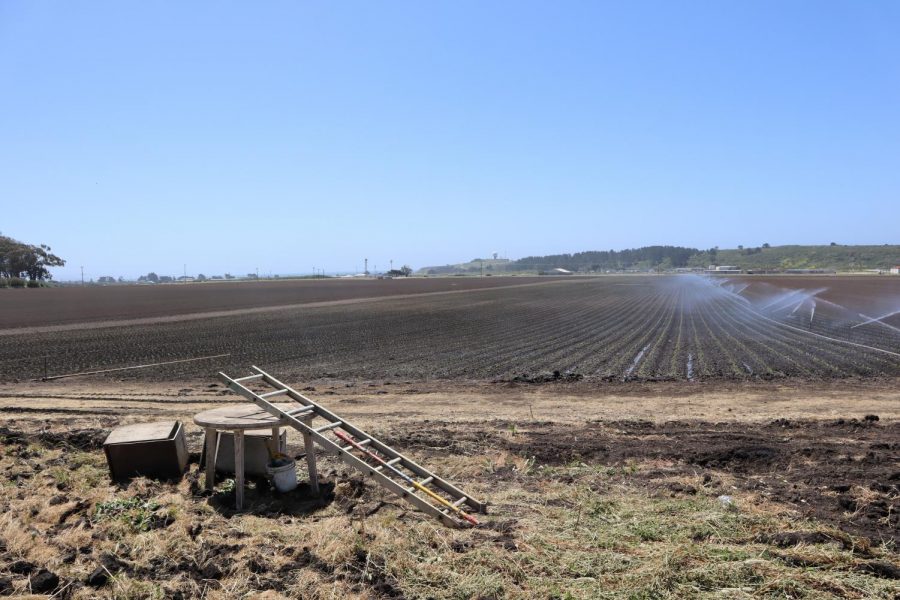 Less than an hour from Silicon Valley, nestled along the coast of Northern California, lies several farms where a more traditional lifestyle takes over.

A trip south down Highway 1 will give you gorgeous views of the ocean and cliffs on your right and more often than not, many local farms on your right. People drive by every day, and while the weather along the coast stays pretty much the same, the stages of the crops in the area lets you know what season you’re in.

John Gross, the ranch manager for Cabrillo Farms in Moss Beach, has worked there for three years.

Gross’s day starts at 6:45 a.m. and ends around 5 p.m. During that time, he is responsible for “keeping the guys working”. His day-to-day routine is always different depending on the season. Some of his responsibilities include hoeing, planting, packing, walking the fields every day and looking for pests, harvesting and scheduling irrigation/spraying.

Gross’s favorite part about the job is that “everyday is different”.

Gross’s job’s proximity to the ocean also allows him access to other favorite pastimes.

“I like that I can still surf and fish after work,” Gross said.

A Half Moon Bay native, Gross attributes his love of the outdoors to growing up along the coast.

But while Gross has always liked being outside, he wasn’t quite sure where his passions lied when he was considering what type of job he wanted. But he did know one thing:

“I knew I didn’t want to work indoors,” Gross said.

Previously, Gross worked for another local farm, Giusti Farms in Half Moon Bay where he started when he was 16. He went to college at Cal Poly Pomona and graduated with a degree in plant science. After graduation, he came back to the Bay Area where he got a job with Cabrillo Farms. So working on a farm is something that Gross cares deeply about.

“I’m hoping to buy into this farm eventually,” Gross said.

The owner of Cabrillo Farms, Dave Lea, has two daughters, who love the farm and would love to see it continue but they aren’t interested in running it.

“They fully support Dave and his venture here,” Gross said. “They love it and want their grandfather and father’s business to keep going.”

Gross attributes the change in demand for certain veggies to people’s healthier lifestyles.

“We used to sell to freezers for frozen foods, but now we sell to high-end customers who will re-sell to restaurants in San Francisco, Dallas, and Chicago,” Gross said.

Gross estimates that about 25% of the Brussels sprout crops go to San Francisco and Oakland markets, with some of the crops going to local eateries like Pasta Moon.

Along the coast, Brussels sprouts are king, especially since California is the only state to grow them in the country. The cool temperatures and foggy weather are perfect for the vegetable.

At this time of year, Cabrillo Farms is starting to plant and doing groundwork such as plowing and fumigation since there is no crop rotation due to the small area of land.

Another local farm that is getting ready for planting is Greenhearts Family Farm CSA (community-supported agriculture) located off of Highway 1 in Half Moon Bay.

“Farmer Paul” as he introduced himself, is Paul Hamilton, the owner of Greenhearts Family Farm. They sell a little bit of everything from artichokes, lettuce, onions and strawberries to cauliflower, carrots, and Half Moon Bay’s famous pumpkins.

Hamilton runs the business with his partner, Aurora Wilson. On a farm in New Zealand, they fully realized their love of taking care of the land. That love of the land has informed how they run their business today. Sustainability and buying local is really important to them, as can be seen in their locally-grown and personally-picked produce subscription boxes. The subscription boxes may contain fruits, veggies, eggs, chicken, beef, lamb, honey, kombucha and flowers. A weekly box of the goods is $39 and everything in it is environmentally- and seasonally-conscious.

Hamilton has owned the farm business for 14 years and takes the responsibility very seriously. Farming is hard work as Hamilton well knows.

“It uses up your body,” Hamilton said.

But he’s moving forward with it. He echoed a sentiment that is felt from a lot of farmers: “I don’t know how to do anything else.” While the community and farm workers rely on the farm, there are a lot of pressures associated with running one. Some of the biggest issues that farms face are finding labor and staying afloat financially. Many farmers are no stranger to this.

John Giusti, owner of Giusti Farms in Half Moon Bay, has faced some of the same problems.

“It’s stressful,” said Giusti in a phone interview. “You have to make sure the money is there, do the payroll every two weeks, when something breaks down you have to make alternate plans … you have to deal with people and their personalities.”

With so much working against local farmers, what makes them keep going?

“Every year is a clean slate,” Giusti said. “You have a ranch of empty fields and you have to make decisions and turn those to growing fields, have to get those marketable and at the end, you reap the benefits. Hopefully, there’s enough in the bank to keep going for another year.”

Giusti knows a little bit about farming. He has worked on the farm since he was a kid but didn’t realize his interest in farming until he went to college.

“I figured out by sitting in the classroom all day that I didn’t want to stay in an office,” Giusti said. “I knew I wasn’t going to be happy behind a desk.”

At the end of the day, Giusti said the work is “really rewarding”. As we were about to end the conversation, Giusti added, “I’m in the fields right now. … There’s not much here right now but in two months, there’ll be green in the fields.”