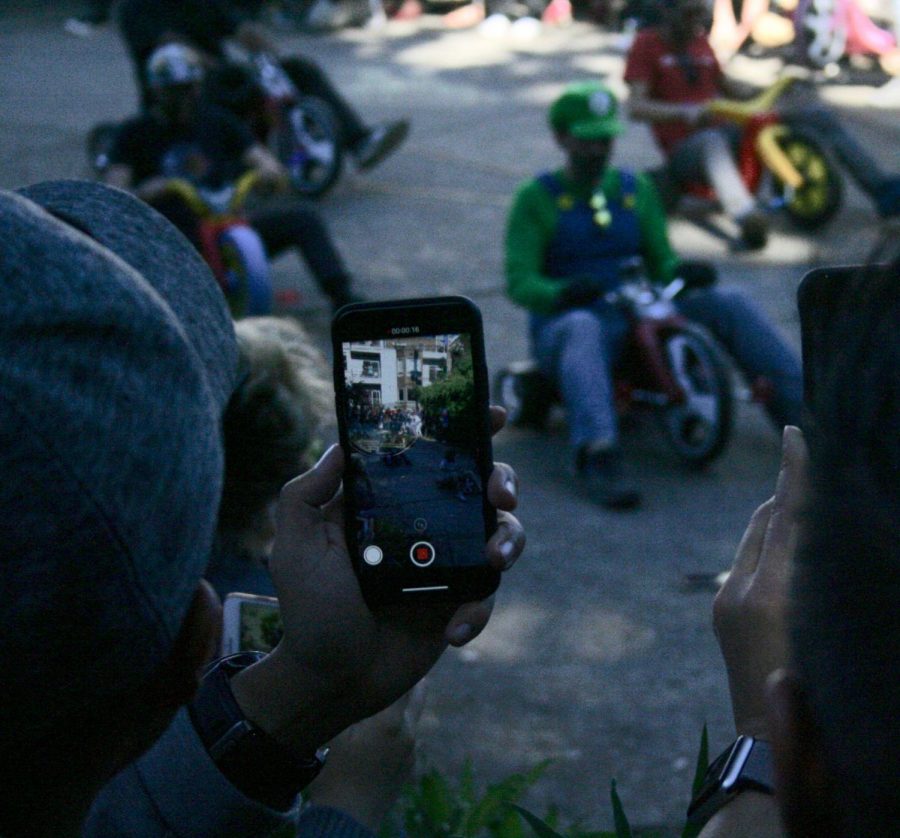 Forget the Easter Bunny and the traditional egg hunt. San Francisco has its own Easter tradition unlike any other.

Bring Your Own Big Wheel, or BYOBW, turns adults into kids every Easter Sunday as they navigate through a crooked street on the classic kid’s toy.

The entire tradition started in 2000 when Jon Brumit went down Lombard Street in a big wheel toy along with several of his friends. After years of it being a small, friendly gathering, the event grew in popularity in 2006 when more than 30 people rolled down Lombard Street with their own big wheels, giving tourists and bystanders an added twist to the crooked street.

Unfortunately, due to this outstanding turnout, the residents of Lombard Street decided that it can’t continue due to larger than normal crowds and wreckage of the plant life.

Luckily the city of San Francisco has two curvy streets.

Now, most people would think that Lombard Street is the only curvy street that San Francisco has but that is not true. At the intersection of 20th and Vermont streets in Potrero Hill, a six-turn curved street is situated near many trees and houses that aren’t as recognized compared to Lombard. This not-so-famed crooked street has been the “race track” for BYOBW since 2007.

Since then, the event has grown with hundreds coming out every Easter Sunday, many even attending in costume as if they are running the Bay to Breakers race. Unicorns, minions and animals of all kinds made the 2019 edition of BYOBW, a show of itself to see who or what might tip over or spin out while making a turn.

Other participants of BYOBW look to get creative with their choice of ride, spanning from tricycles, toy cars and homemade inventions.

“This is one of the coolest things about San Francisco is the big wheel race,” said Laura Gilchrist, who along with her friend, turned two wagons into a Golden Gate Bridge vehicle. “There’s nothing like it in the country so we wanted something to represent the craziness of San Francisco.”

“I thought it was just hilarious because the hay bails align the area, so I thought, ‘why not do a road hay bale?’” Frader said.

For many to come out and enjoy this spectacle, a time-intensive effort is put in by the BYOBW team who have a to-do list that stretches the budget more every year.

About six months before the actual event they must apply for a street closure permit with the city and also with San Francisco Parks and Recreation.

Once the two permits are settled, they meet with the neighborhood officials along with dealing with the overall costs for hay bales, portable toilets, no parking signs and various other fees.

Per San Francisco regulations, BYOBW must have four officers patrolling, two from Parks and Recreation and two police officers. They have to pay for the officers to be onsite for the event and it should be noted that the costs for the officers’s services continue to rise each year.

BYOBW has always been a free event, yet with the rising costs per year, donations from participants are almost needed in order to keep it going or to not have a lack of additional resources. At the same time, BYOBW is still able to keep a low profile, with no publicity coming from local news, just its own website.

What’s most fascinating about BYOBW is that they don’t talk to press before the event. They don’t like the local news giving them a lot of air time leading up to Easter Sunday because they really like the crowd to be just people that know about it. They understand that this approach is what made it such a popular event to begin with.

And their small market tactic still brings people out from all across the Bay Area.

“I’m from out of town and I wanted to experience it firsthand,” said Gunner Son, a Sausalito resident, who was riding on his nephew’s Spider-Man big wheel.

The uniqueness of BYOBW is what brings many out for the experience.

“It was amazing, exhilarating, I’ve been waiting ten years for this,” said Dan Orino, who has had his tricycle ready for the past four years. “It’s like riding in your backyard.”

Orino also revealed how he navigated his way down the curvy street.

“Until the last run, I figured out that I gotta break before the corner and then it’s a much smoother turn versus trying to drift into everything,” Orino said.

The event also coincides with kids doing Easter activities at McKinley Square, a park that is right next to the street. For adults, the party atmosphere brings nothing but positive energy, and at the end of the day.