Picture this: It’s 1933, in the midst of the Great Depression. Businesses small and large are closing due to the huge debt the US was in. Yet with all these major life-changing issues with the government, entertainment such as movies and radios still thrived. Theaters survived in those troubling times due to the public need of an escape from the issues that were ravaging the nation.

Fast forward to now: We are again in troubling times. But with the rise of the internet, ordinary citizens also have the power to lighten that weight with inside jokes and dumb humor. Of course, I’m talking about meme culture.

Memes are usually known as internet jokes inspired by relatable problems and situations that we all find ourselves in. I feel this is the way we are combating mental fatigue in this politically divisive time. With the internet sending so much information, and not all of it necessarily fun, having memes that are made clearly for kicks and a good laugh is amazing, and at this point, are a much-needed break.

Many studies show that taking periodic breaks from constant stressful situations is key to keeping you mentally healthy. The biggest example is taking breaks while studying for class. It’s the same idea with the world of politics. Taking periodic breaks from volatile news and politics with a meme that covers something as random as Shaggy from Scooby Doo being a god can be helpful. Or something as basic as relating to others about loving cats will actually help your mental health in the same way it does for studying, which is highly recommended.

There are people who would say, “Just get off the internet.” But in this day and age, a good majority of what we do is on the internet. We will likely come across a handful of articles that will give us more than our fair share of hopelessness and anger. While we’re online and exposed to so much, it’s really good that we have other, more enjoyable options to look at other than hard news or political agendas.

“Ignorance is bliss” is a common saying for a reason. But in these times, as much as we would want to, we can’t always turn a blind eye to certain topics. Even to topics we don’t necessarily want to know about. But taking a break from being an adult and being all serious to laugh at Pikachu being shocked about Skyline’s classes being canceled, again, can be very relieving. So the next time you feel guilty about procrastination on your midterm while looking at a meme, take comfort that you’re taking time for self care in this time. 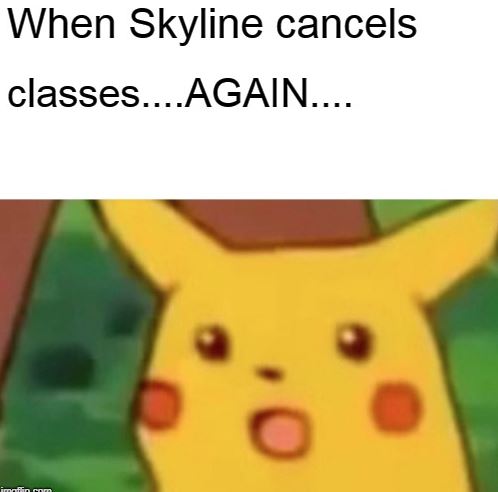