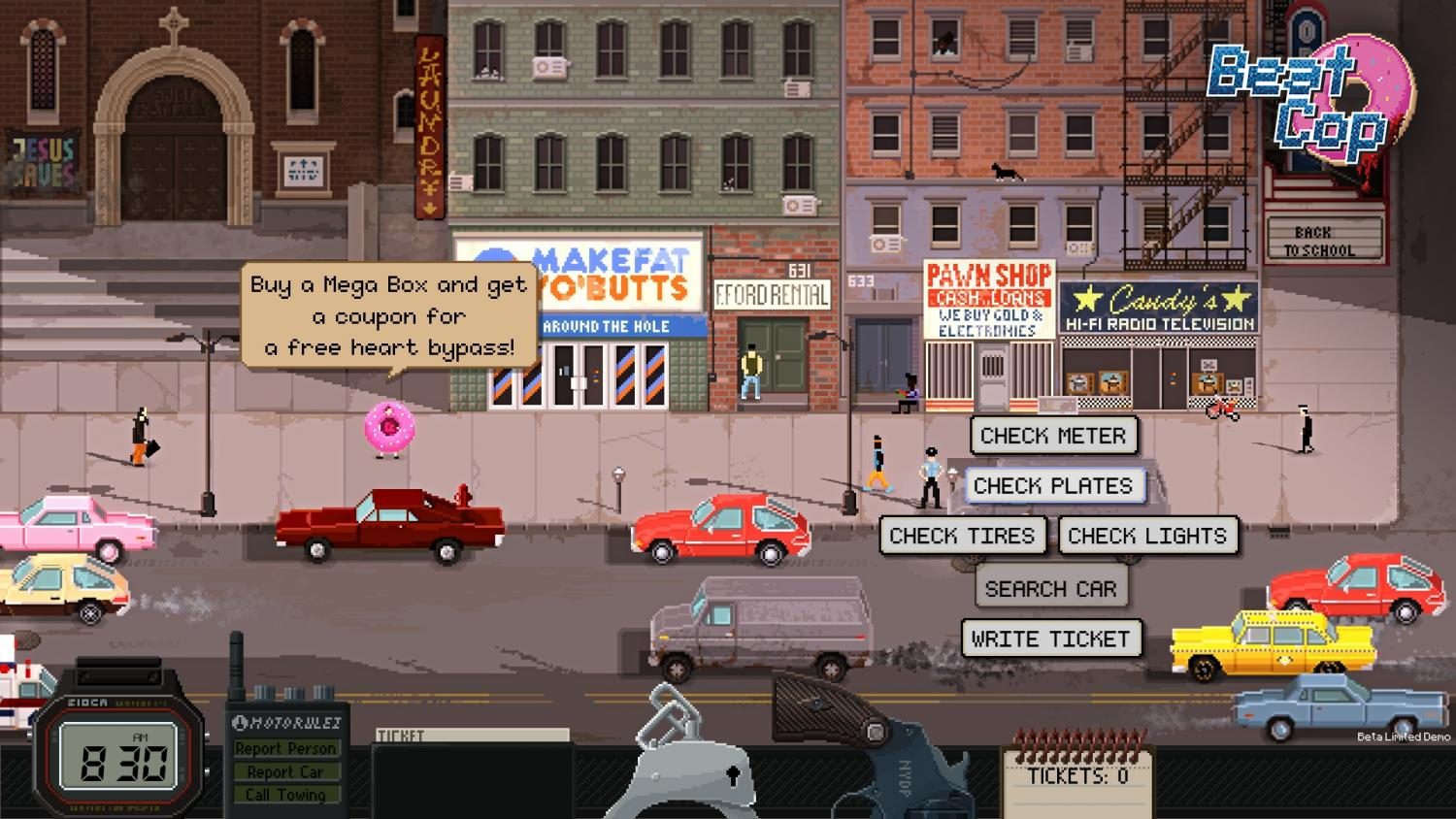 It is easy to like “Beat Cop.” The game just oozes with polish, great design and concepts that are sorely ignored in game design nowadays.

The gameplay is probably the hardest sell for people who enjoy huge varieties in their video games. As a police officer, you will be tasked to write tickets, patrol the beat you are assigned and arrest drug dealers every once in a while. The player will earn money depending on their performance. Some gamers who are used to “action-y” games will think that “Beat Cop” is repetitive and that the action or interesting quests are far and between.

However, this is how things go in an officer’s life sometimes and it is brilliant. The game explores an exaggerated version of a day in the life of a police officer and the mundanities that come with it. Meanwhile, it slowly supplements the player with interesting side quests and activities in a way to extend the length of the gameplay.

Despite the length of the gameplay, the best part about “Beat Cop” is that it can abruptly end if you make a wrong move. The death of your cop ends the story, but you can always replay it and reverse your decisions to continue that story arc. If the player fails to shoot a bad guy or unable to stop a suicide attempt, there will be a corresponding news clipping for that relates to the incident. These details were more frequent in the “Sierra” days of point-and-click games but now it is sorely ignored.

The game lets you replay the days where you messed up, increasing the game’s replay value even further because it lets the player redo certain scenarios in the game. The gameplay is not very difficult at first, which is appropriate, considering that the game ramps up the difficulty as you play it. It is fun to write tickets, decide whether or not to take a bribe and shoot armed robbers every so often. The moment to moment gameplay is very intriguing and you’ll always wonder what will happen the next day.

The story is just like every typical early 1980s-era action movie, which was the intended theme of the game. The motif isn’t particularly original but it is a great platform for “Beat Cop” to play with the mundanity of an officers’ day. As the game is played through days, with each day lasting about 15 to 20 minutes, it allows the player to get involved with the character just like a good television show would. In fact, the developers tell the player at the start of the game that this was their intention. Not a lot of developers tell you their goals and deliver that exact experience right off the bat.

Aesthetics is the best aspect of “Beat Cop” besides its gameplay. The pixel art style is incredibly detailed. The small section of fictionalized New York is filled with street loiterers, stray cats, homeless people, trash and all kinds of parking violators that make this street corner come alive. In a world where pixel art is overused, “Beat Cop” stands out as a brilliant outlier. The pixelated smoke effects on cars are fantastic as well.

At the end of the day, “Beat Cop” embodies every 1980s cop action flick which is what some players want while in other cases, didn’t even know they wanted. This game is available on Steam for $15 and it is worth every penny.