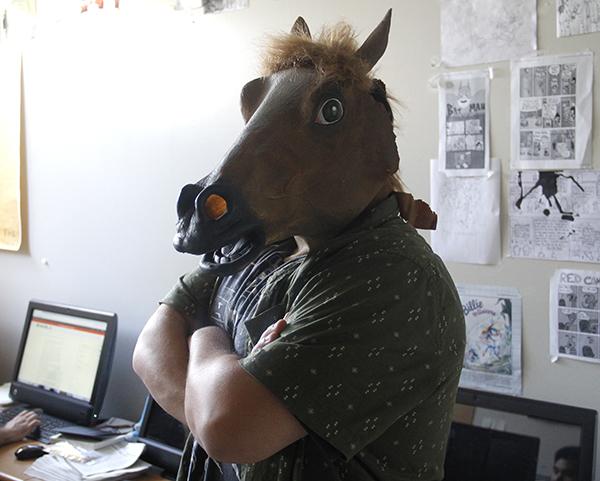 What’s that smell? Is it trash? A dead whale?

Rappin’ Hasbro, a local man who happens to be domestically challenged, has come out ahead in a recent voter poll for the upcoming ASSC elections.

Hasbro’s name is a bit of a misnomer; He prefers prose over poetry (although he will occasionally speak in an Elizabethan rhyme scheme), and bears no affiliation with the toy company. However, in spite of his nomenclatural ambiguities, Rappin’ Hasbro has a commanding 90 percent support rating, a level of approval usually only achieved by the cruelest of dictators.

Hasbro’s popularity has been due in no small part to his ability to appeal to both conservative and liberal voters. Hasbro has proven himself to be mercilessly tough on crime. He once bit off a man’s fingers for trying to steal a half consumed Mr. Pibb that he had found on a park bench. He has also taken a strong stance on homeland security, as he frequently performs surprise pat-downs of bystanders. Conversely, his unwashed, mangy appearance makes him virtually indistinguishable from the average hippie, and, naturally, very appealing to Democrats. Hasbro is also an avid recycler, often reusing his own urine for drinking and/or showering.

“I think it’s refreshing to have a candidate who doesn’t fit what the mainstream defines as ‘sane,’” said local hipster jerkoff Ian Marshall. “We need to be more tolerant of different kinds of candidates and stuff. It’s 2015.”

However, some of Hasbro’s opponents claim that he is unfit to lead, citing his eclectic nature, unorthodox theories regarding governance, and the fact that he doesn’t actually attend Skyline.

“He said he was going to eat my face!” said Steve Gallagher, who wished to remain anonymous. “He was going to eat my face, my mom’s face…Then he flashed some people at a bus stop. Someone should do something. Does he even go here?”
If elected, Hasbro has numerous plans to improve the student experience at Skyline. One idea would be the implementation of an inter-district shuttle service that would travel between Skyline, College of San Mateo, and even Canada, though not Cañada.

“Plan to kill,” Said Hasbro of his proposal for a designated composting zone. “Hell worms liveineverybody! Japanese cake.” Hasbro then broke into an impromptu jig, before throwing a half consumed pimento loaf at a very frightened woman.

Hasbro brings a tremendous amount of experience that could help him be a very effective president. He is a determined and shrewd businessman, and owned and operated a highly successful “rat farm” for the better part of the 1990s. While his business eventually folded due to reports of plague and a lack of tangible profits, Hasbro had proven that he was a born leader, and was a natural at dealing with disease ridden vermin. The transition into politics was seamless.

“Fingers crawlin’ out the mouth,” said Hasbro of his trailblazing run as the first domestically challenged candidate. “Sacrifice your first baby today!”