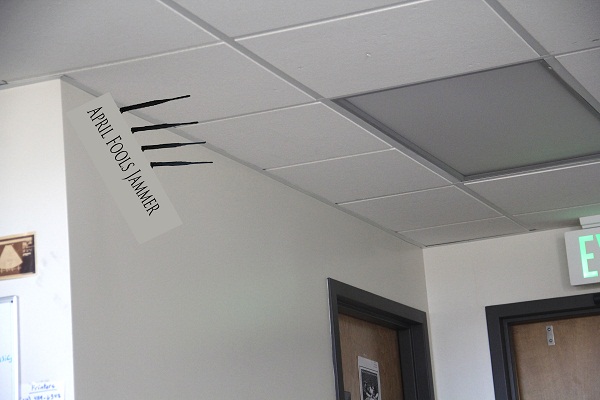 The jammer to be installed throughout campus.

Skyline college has begun installing wide-range cell phone jammers throughout the campus in an effort to encourage students to look up and talk to one another.

The decision to fully install jammers campus-wide was made after a small study on Skyline’s campus revealed that over 50 percent of students instantly take out their phones when exiting classrooms, waiting in line at the coffee shop, or generally just standing in the hallway.

The jammers have been configured to only identify handheld devices and aren’t supposed to interfere with laptop computers of tablets.
Referred to collectively as TextNet by the administration, the jammers have been in limited use since early 2014. Many of the dead zones found while wandering through Skyline have been found to be test-runs of the large-scale instillation of jammers school-wide. On the small scale, the jammers were found to be markedly successful.

“It was plainly obvious in building 7,” said biology teacher Andryou Callin. “I mean, there weren’t ever many people, but the ones that were there were certainly talking!”

The recent explosion of personal device use has been on administration’s radar since the dawn of the text message. Instead of turn to converse with their immediate peers, many students prefer to text message their friends, depriving them of the interpersonal conections that are essential to a normal college life. It became common to walk down a full hallway only to be met with silence as people text their friends or scroll through Facebook.

Skyline student Alex Ferdinand Krinkle, known by his peers as AFK, had this to say: “I guess it is kind of hard to talk to random people in the hallways, now. Maybe if you get their number in class or something. But otherwise, I dunno.”

Teachers also hope the jammers will discourage students from texting during class hours. It has become commonplace for students, bored with what’s going on in class, to pull out their phones and start scrolling. The jammers are expected to reach beyond the hallways and into classrooms.

“I think it’s great,” said English faculty member Jarrod Phoner. “It’s always a struggle to keep students attention during my boring lectures, when their attention is divided like that. Now, they have no choice but to pay attention to me!”

It wasn’t hard to find faculty that supported their instillation. When asked how the lack of cell phones might affect the faculty themselves, it was revealed that all faculty phones were given anti-jammer software, allowing them to bypass the restriction.

“Teachers are advised only to use their phones in an emergency,” President Retina Cloud said. “Or when they get an important call. Or a text message.”

Student response would have been overall negative, however the inability to post responses onto social network has significantly reduced the public outcry over the decision. When students were asked what they thought the large, black, radio-like devices that were being installed across campus were for, many remarked that they had failed to notice them at all.