Looking back on one year of President Joe Biden 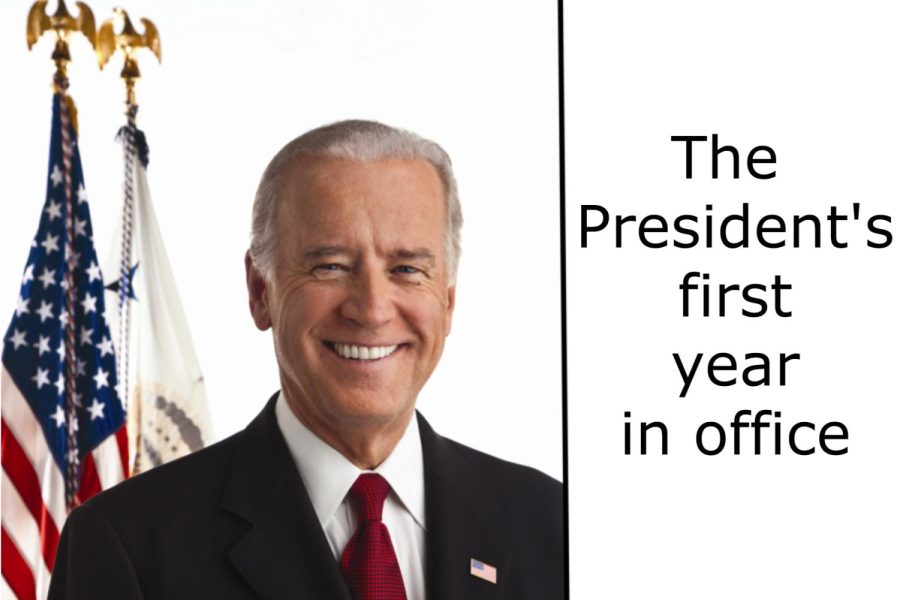 President Joe Biden reached the one year mark of his presidency on Jan. 20, 2022.

We are one year in — It’s time for another check-in on the Biden presidency.

In May, I claimed that President Joe Biden’s strong point was his handling of COVID-19 and America’s vaccine rollout, while the rest of his agenda left much to be desired. A year in, I see little to praise about Biden’s handling of the pandemic.

Biden declared premature victory over COVID-19 in July, championing a return to normalcy. He was so very wrong. Waves of delta and omicron variants have since tormented the nation, showing that we are by no means out of this mess.

I do not blame Biden for the variants, but I do believe his administration failed to adequately prepare for future mutations. Testing kits remain hard to find in many parts of the country, something that could have been fixed with federal programs months ago.

Throughout the past year, Biden has tried to liken himself to FDR, a man known for massive federal intervention during the Great Depression. Biden has largely been the opposite: his state-first mentality has left too much power in the hands of governors, who too often make decisions based on politics and not science.

The worst aspect of this is that the Biden administration, once again, claims victory by urging ordinary life to resume. While I am not opposed to this, it ignores the reality that there are still stringent COVID-19 preventative measures in many states and localities. How can one claim normality if school being open is still up for debate?

While the COVID-19 response left much to be desired, Biden followed through on his promise to end the forever war in Afghanistan. It was messy, but it was a moment of moral clarity that I believe will be viewed as the highlight of his administration.

Unfortunately, there is not much else to be excited about when it comes to Biden’s first year. His administration flopped on legislative promises made to voters. The American Rescue Plan, Biden’s premiere legislative accomplishment, had two main flaws: It failed to deliver a $15 minimum wage to American voters, and the popular provisions in the bill would expire after a year.

Biden never truly had a plan to include an increase in the minimum wage, but his proposed Build Back Better (BBB) Bill did address the expiration issue. Unfortunately, senators Joe Manchin (D-W.Va.) and Kyrsten Sinema (D-AZ) continued to exert more influence over the bill than Joe Biden himself.

BBB was shrunk multiple times during negotiations with the two conservative Democrats. It was clear that Biden was leaning towards the right flank of his party as the bill became increasingly conservative. This created immense tension between the majority of the party spearheaded by the left flank and the two senators.

Eventually, Biden allowed BBB to be split into two bills, one that looked like a progressive social spending bill and the other that was no more than a Republican infrastructure bill. The former kept the title of BBB, while the latter was nicknamed the Bipartisan Infrastructure Bill (BIF).

The bills were supposed to be tied together, so both sides of the aisle would be pleased. However, in a stunning move of pure genius, the Biden administration allowed the bills to be delinked. This resulted in BIF passing, while BBB was left dead in the water.

While many claimed BIF as a success, Democrats should view it as nothing but Biden getting played. The bill that was passed will do little for the environment; it barely addresses the massive scope of our nation’s infrastructure problems and leaves out the social spending provisions that are designed to help the working class and minority communities. It is for this very reason that progressive lawmakers like Representative Ocasio-Cortez rejected the BIF.

BBB was not the only causality sustained over the past year for the Biden administration. The John Lewis Voting Rights Act and the For the People Act were unable to pass the U.S. Senate. Once again, Joe Manchin and Kyrsten Sinema can be thanked. Biden sold himself as someone who would be able to get moderate and conservative voters. This wasn’t the case.

The Democratic party, fueled by high youth and Black voter turnout, voted Biden on the belief he would deliver. So far, the only piece of legislation he has passed does little for the marginalized groups that propelled him into the White House.

In addition to not passing legislation for these communities, Joe Biden has refused to sign key executive orders that would undoubtedly help the party’s base. Biden has the power to cancel student debt or legalize marijuana use on the federal level. You cannot blame conservative senators for this lack of action; this falls squarely on Biden.

The Biden presidency leaves much to be desired and gives little hope for future improvement. At this point all one can say is “at least he isn’t Trump.” Unfortunately for us, that simply isn’t enough.