Student Activism is Everywhere, But Don’t Call It A Comeback 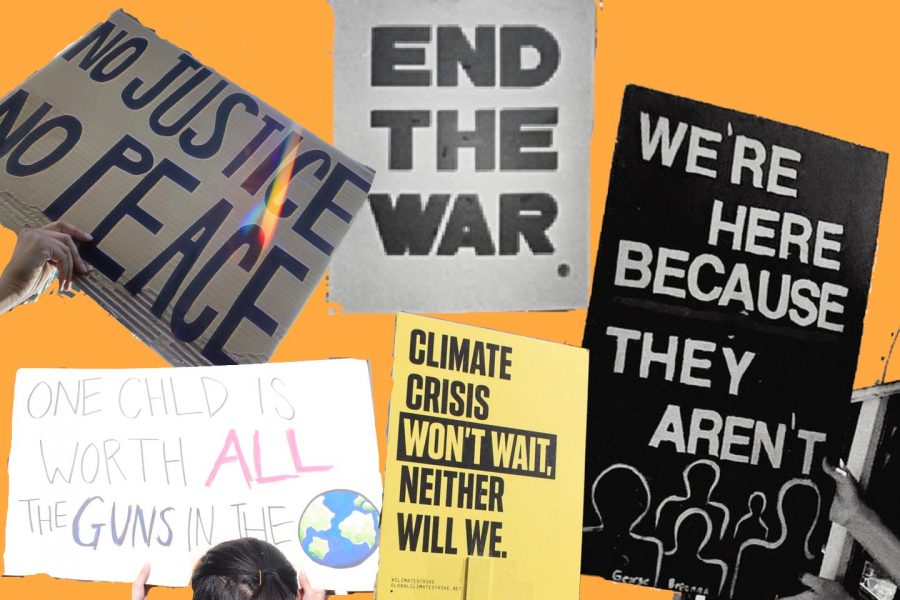 A compilation of signs from various protests.

In the past few years, there has been a surge in the number of student-led protests and organizations. Most recently, the Black Lives Matter movement has taken center stage. From marching in the streets to posting infographics on their social media, college students across the nation joined forces to protest the systemic racism and police brutality ingrained in this country.

While a majority of people have applauded Generation Z for their commitments to reform the systems and world around us, some have criticized these efforts. Critics have claimed this brand of activism is simply a fad: a form of virtue signaling to appear “woke” to their peers and on social media.

To think, college students are new to all of this is a falsehood, as we have always been aware and engaged with government inflicted violence. 50 years ago, students had the same passion and grassroot strategies when it came to protesting US military presence in Southeast Asia.

By the 1970s, college campuses became the epicenter of anti-war rallies. Student groups held demonstrations and protests to vocalize their anger towards the pointless deaths of their peers and the rising deficits of the Vietnam War. Following the Kent State Massacre, a fatal shooting that occurred during a peaceful protest at Kent State, these tensions and protests would only increase.

Much like today, this historic movement featured students from various backgrounds and educations, no one was excluded from producing change. In fact, several of these rallies and demonstrations occurred at our very own California Community Colleges.

As protests grew more restless, Governor Ronald Reagan ordered California State and UC campuses to cease classes between May 6 and May 10. Although this order did not force private and community colleges to close, many followed suit.

Taking advantage of the cancelled classes, Cañada students organized and voted 132-96 to keep the campus open and strike for the rest of the semester. Students and faculty worked together to create a two-day symposium, filled with lectures and workshops detailing the situation in Southeast Asia and the killing of the Kent State students. What was supposed to be a two-day event from May 7 to May 8 ended up continuing until May 22.

At Skyline College, similar events have been taking place. On May 6, Skyline students called for a schoolwide meeting to urge their peers to continue boycotting classes once they resumed. The next day, May 7, with classes canceled but campuses still in operation, Skyline’s faculty senate passed their resolution of support. This resolution would allow students to continue organizing a plan of action for the upcoming week.

The next week, beginning on May 11, Skyline’s Student Strike Committee announced their plans for a week‐long symposium filled with teach-in styled lectures and activities. Students could attend lectures about the Domino Theory, defoilization, or even catch a showing of a short film, “Viet Nam — How We Got In. How We Can Get Out”.

Like those involved in the Black Lives Matter movement, students quickly organized to put together resources and speakers to further educate themselves and others about the matters at hand.

Together, students from both generations saw their efforts pay off. Just like politicians listened to chants of “defund the police”, President Ford heard the pleas of the people and pulled us out of Vietnam in 1975.

“Things went back to normal, only some students continued to radicalize and organize, after everything,” said Rich Yurman, a retired Skyline professor who was teaching English at the college at the time and was a strong supporter of the protests, speaking on the impact the anti-war movement had on US community colleges.

Although change was not immediate on campus, the anti-war rallies along with other notable movements would provide the foundation and tools for future generations to continue this legacy of activism. In the next decades, college students would channel the same perseverance, plans of action, and passion for change as they sought to battle various injustices in the world.