‘White Fragility’: Self-help with a side of bigotry 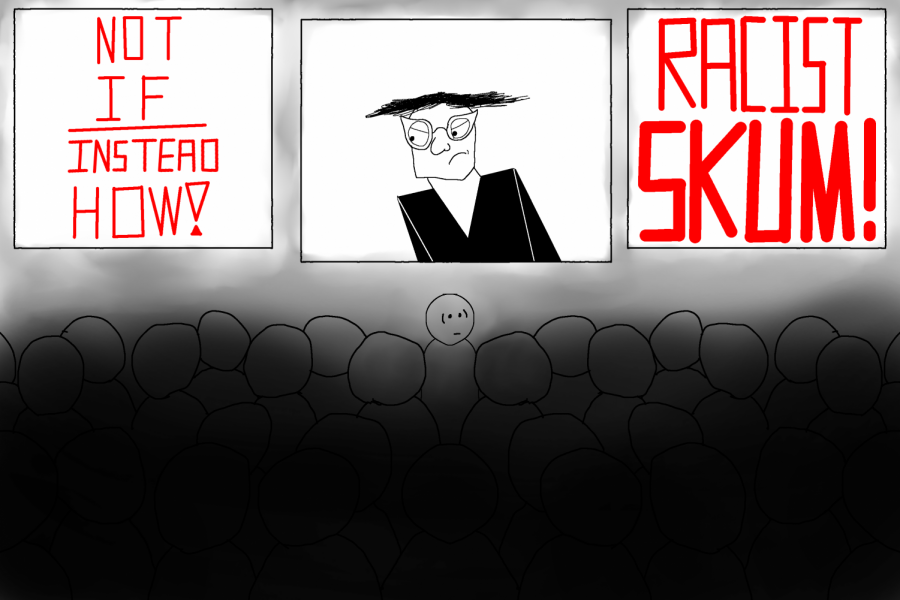 A image of Robin Diangelo about her unwillingness to listen to any other viewpoints displayed in her book "White Fragility".

“White Fragility” by Robin DiAngelo is a self-help book intended for white readers, to help them open up on conversations of race and shed their racist attitudes and beliefs. This is, however, ironic, due to how poorly the book does at starting a conversation, and how it inadvertently promotes more bigotry.

The issues range from setting an impossible standard for what constitutes being “not racist”, like when DiAngelo declares on page eight that “We must be willing to consider that unless we have devoted intentional ongoing study, our opinions are necessarily uninformed, even ignorant,” and from 2:36 to 2:53 in the NBC News video “Debunking The Most Common Myths White People Tell About Race”, when she states that “The challenge I want to offer my fellow white people is changing the question from ‘if’ to ‘how’. The dominant culture asks ‘if’ I’m racist. I want to change that question to, ‘How have I been shaped by the forces of racism?’”

DiAngelo also uses her book to repress dissent that does not line up with her worldview, which can be shown on page 119, where she lists feelings, behaviors, and claims that are examples of what she calls “white fragility in action”. The things listed are quite telling of DiAngelo’s feelings about discussions that do not favor her. One of the actions on the list of behaviors is “arguing”. “I disagree” is on the list of claims.

“None of this seems to have led her to look inward,” reads the article “The Dehumanizing Condescension of ‘White Fragility’” by John McWhorter for The Atlantic, pointing out DiAngelo’s circular reasoning about the negative reactions her diversity trainings elicited. “Rather, she sees herself as the bearer of an exalted wisdom that these objectors fail to perceive, blinded by their inner racism. DiAngelo is less a coach than a proselytizer.”

This paints a clear picture of DiAngelo’s thought process, which is that if you don’t agree with her, it just shows your “white fragility”.

This book is the embodiment of everything wrong with this particular brand of “progresssive” thinking. I would not recommend this book to anyone except two types of people: This book could be good for spineless white “liberals’” and for bigoted white MAGA-type “conservatives” like Ben Shapero and Tucker Carlson. I find it ironic that the sort of people DiAngelo complains the most about are the very ones who benefit the most from it — This book is the perfect “loony left” material for conservatives to gawk at and use to justify their own narrow-mindedness.

The thing that we all need to learn from this, no matter who we each are individually, is to not divide each other the way both liberals like DiAngelo and all the conservatives who use her book to justify their own closed-mindedness. I think this sort of book — the sort that, whether the one who reads it is liberal or conservative, ultimately contributes to further dividing the public rather than uniting us — are the sort of thing that we should not support, especially now, in the wake of everything that has happened in the past year. We as a people should combat bigotry with understanding, not with different types of bigotry. Then we would just be left with more bigotry than we started with. We need to be better than DiAngelo, by treating others as equals. We should also stand up against oppression whenever it arises, without getting rid of one’s critical thinking (if you’re white), and without setting up a new set of double standards. We should judge each other based on the content of our character, not our skin color like MLK says. One should not need to sacrifice their free thinking in order to be considered progressive. If we; the human race, fail to treat each other as equals, I fear that we would be stuck in a never-ending cycle of hatred and bigotry. Someone; meaning you, I, and the rest of us, needs to stand up to hatred and bigotry in all its forms, with love and understanding.