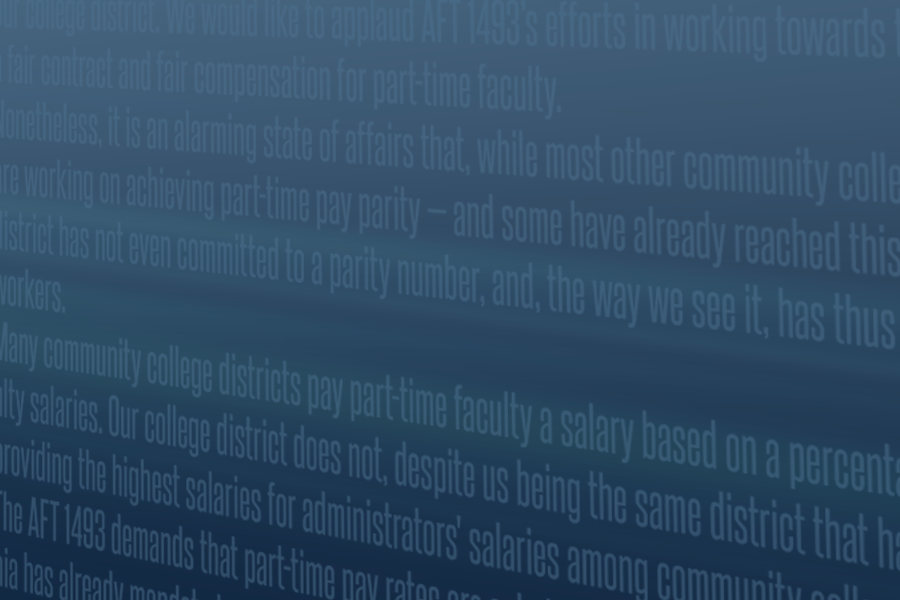 The workload on professors at our district affects students' learning outcomes. Our district's commitment with AFT 1493 is an investment it makes in its students — one the district is failing to make.

We at The Skyline View have been closely following AFT 1493’s struggle for fair working conditions in our college district. We would like to applaud AFT 1493’s efforts in working towards the arrangement of a fair contract and fair compensation for part-time faculty.

Nonetheless, it is an alarming state of affairs that, while most other community colleges in the Bay Area are working on achieving part-time pay parity — and some have already reached this goal — our college district has not even committed to a parity number, and, the way we see it, has thus failed its part-time workers.

The AFT 1493 demands that part-time pay rates are set at 85% of full-time salaries. The state of California has already mandated setting parity goal percentages since 2001, but our district remains the only one not to do so. Colleges’ part-time workers have a similar workload –– on top of their other jobs –– yet are underpaid compared to full-time workers.

In a recent article, The Skyline View reported that the college was in violation of the “50% Law”, a California state law that has required each community college district to allocate no less than 50% of its general fund expenditures to “salaries of classroom instructors”, using a formula based on the current expenses of education. The school’s current percentage of allocation is 42.4%, according to the AFT 1493.

Spending at least 50% of the general fund expenditure would make the lives of our district’s part-time workers easier. It would allow many to afford health insurance, as well as devote more time to working with their students. The district’s attitude towards its 600 part-time workers is a reflection of its degree of commitment to labor rights.

We are standing by AFT 1493, and suggest starting with 80% of what a full-time worker earns and gradually working towards 100%. The district’s part-time workers are currently at about 65%, depending on where they fall on the salary schedule, and some are at 60% of a full-time worker’s earnings. In addition, the district offers no real health benefit program — just a small reimbursement for money spent on healthcare.

The workload on professors at our district affects students’ learning outcomes. Our district’s commitment with AFT 1493 is an investment it makes in its students — one the district is failing to make.