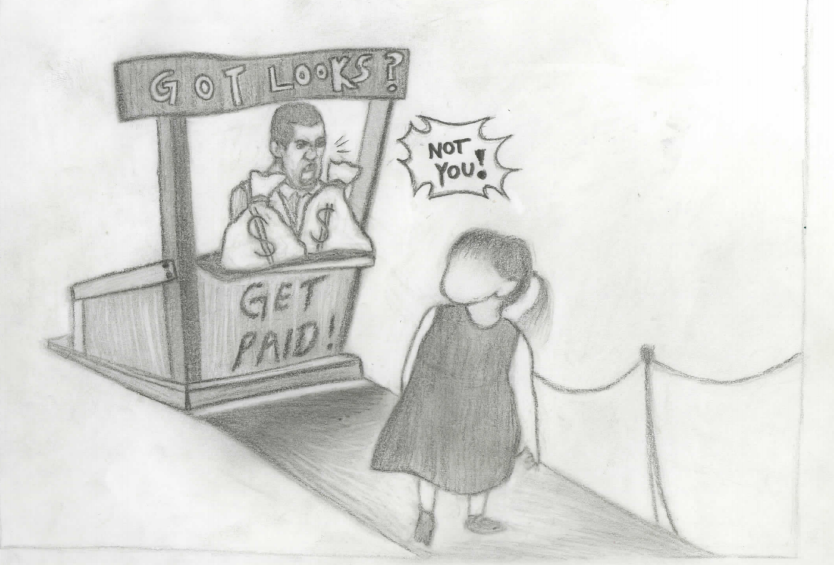 We refuse to acknowledge the fact that our “looks” and our “beauty” give us the mobility to move swiftly through the world and through American society.

It’s a very hard pill to swallow, I know. But we have to address it before it becomes an issue that is swept under the rug forever. Being “pretty” or “handsome” makes people look at us differently. It makes it easier for us to be more successful to put it plainly.

I have never felt physically attractive. I’ve had to work twice as hard to be likable as opposed to other people who could just look great. It’s not to say that attractive people get things handed to them, but most certainly they benefit a lot from what others would be willing to do for them.

They say “beauty is in the eye of the beholder” that is to say that beauty is subjective. Attractiveness means different things to different people and different groups of people.

Here in America, beauty is synonymous with being white, thin, able-bodied and feminine. For men, it means being white, tall, muscular and masculine. As a young teenager, I often wondered if I would reach this level of attractiveness. After all, I loved the world of fashion and I really wanted to be a part of it.

Handsome has never been the word that people chose to describe me. I grew up as a minority, short, not the type of person somebody would brag to their friends about dating. I’ve had a lot of great opportunities because I worked really hard for them. I’ve also been rejected from some opportunities and I knew it was because I didn’t fit the ideal image.

People who are considered to be attractive are more likely to get hired somewhere, they can climb the career ladder easier, and have higher salaries. They also do not get punished as harshly. They are also considered to be healthier, reliable, and more competent than others. This is an inherent judgment that people make unconsciously.

Pretty privilege skeptics will often tell you to ask a pretty girl how many times she has been insulted for turning someone down or to ask her what she’s really gotten out of her looks. This rhetoric is often used to deny the claims that looks get you places.

According to “Real Girls, Real Pressure: National Report on the State of Self-Esteem, Dove Self-Esteem Fund,” pretty privilege can be the reason why “7 in 10 girls believe they are not good enough or do not measure up in some way, including their looks, performance in school and relationships.”

It has a profound impact on women mostly, and even men. I have personally witnessed this type of privilege happening. Like when I was a manager at a retail store.

At one point, we hired somebody that was deemed attractive and charming by many of the workers. The young man went on to make many mistakes, but was never reprimanded by his management as hard as that same management reprimanded other workers for lesser mistakes.

He was often excused for his unexcused absences and was told to just “try a little harder.” I could tell he had never had to really work hard for anything in his life, thus far.

I have had to learn my place. I’ve had to understand that certain things did not happen for me because I did not look the part and not because I truly was not capable of doing the work. My work ethic and intelligence are the pillars of my self-confidence.

People need to know that their judgments based on attractiveness are only superficial. This does not tell you about the quality of work someone does. People also need to know that this type of privilege exists. It is not only dangerous to young women and men but a disservice to those who truly work hard as well as have amazing non-superficial qualities.