BART and Sam are not students’ homies 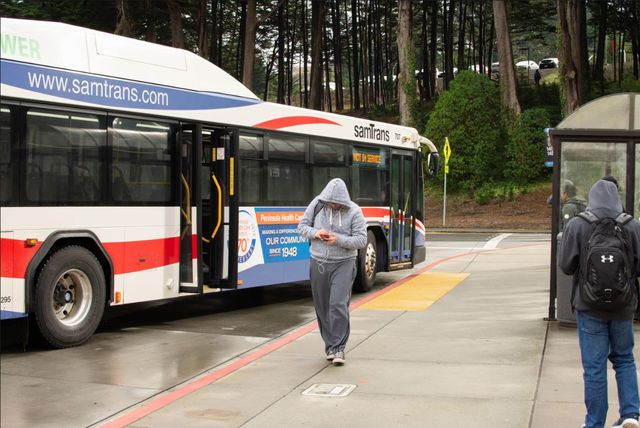 In order to minimize the number of cars that are driven on a daily basis, public transportation companies like BART and SamTrans should implement a discount system for students who rely solely on their services for their daily commutes.

A survey was conducted by the San Mateo Community College District during the Spring 2018 semester where approximately 22,000 students addressed their concerns and reasons as to why they did or didn’t utilize public transportation for their commutes to any of the three colleges.

It wasn’t much of a surprise to learn that nearly 90 percent of students within the district drive to school. However, I never would’ve thought that 29 percent of students use Lyft and Uber to get to school considering the drastic difference between rideshare options and public transportation.

It is understandable that rideshare options seem more appealing to students so that they don’t have to plan out a significant amount of time around their commute. It’s easier to call a ride with a press of a button and get to class than to worry about catching that one bus that’ll get you to campus an hour before the class starts because the next bus would make you late.

Depending on the type of service you use through Lyft or Uber, the price still doesn’t come close to a one-way trip on a bus. Sure, time efficiency is a huge factor that plays into one’s decision to not take public transportation and that’s why a student discount could potentially increase the number of students who use a bus or BART and the free shuttle to get to Skyline specifically.

Out of the three colleges, 38 percent of Skyline students stated that they didn’t take public transportation because the trip takes too long, meanwhile 49 percent of students within the district reported that convenience was a secondary factor as to why they don’t utilize SamTrans.

Although students would like to see more of a direct service to campus, it’s understandable that there’s not much that can be done about that. The routes created have certain stops that they need to make and the only way that a commute could be quicker is if there wasn’t anybody waiting at a scheduled stop.

Although it may not be feasible to do this, it could be useful for the district to partner up with SamTrans to offer a direct line to the three campuses with minimal stops similar to the shuttle service Skyline provides for students from Daly City BART.

Similarly, Skyline could create new shuttle lines for students that live in South San Francisco and San Bruno. Considering the Daly City BART shuttle is free for students, I believe that students who live closer to campus would be more likely to use a shuttle if there was a line offered at other BART stations.

It was reported that students were evenly divided in their support for a student fee assessment to fund discounted transit passes. Meanwhile a mere 27 percent of students stated that a discount would encourage their use of public transportation.

It is useful to note that Skyline offers a Carpool program where if three students commit to commuting to campus together, they’ll be able to park in a specific carpool parking spot that is available only to them.

While there are counter arguments for a plethora of the reasons why students don’t take public transportation, I do believe that offering a discounted price will encourage a number of students to get to school instead of driving their car.

There are a number of solutions that could be implemented to encourage students to use public transportation to get to school. A student-based discount isn’t the only solution that should be considered. The shuttle service from Daly City BART is a great start and I think that Skyline should look into offering a shuttle service at other BART stations within San Mateo County for students who don’t have access to a car.