Classic heroes get a new look 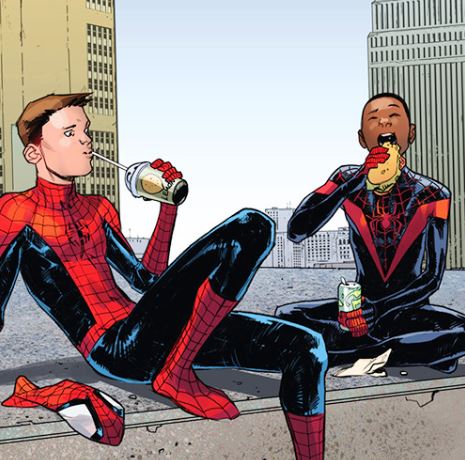 skyjournal
Now that comics are growing off the page and are continually being adapted to the big screen, the fan base for them has expanded. With more and more people seeing these heroes, the need for mass appeal has also grown. Some fans feel like the casting of more racially diverse actors in these roles is wrong, and in some cases offensive. However, I feel that it opens up opportunities to tell new stories and from new perspectives.

The succession of two well-known black characters, Miles Morales as Spiderman and Sam Wilson as Captain America, are great examples of the comics breaking the racial mold that was created years ago.

The comics are progressing with the times, and though we have to say goodbye to the likes of Peter Parker and Steve Rogers, it makes way for new faces such Morales and Wilson. It’s worth seeing ourselves and the conflicts tied to ourselves, such as issues regarding racial justice and stigma, portrayed in comics in some way.

Comic book characters can be altered in more than just ethnicity to show a new perspective. Jane Foster as Thor and Carrie Kelley as Robin, are heroes whose personas were previously portrayed by men. So if the source material did it, why not the adaptations?

Yet, when casting an actor of opposite gender than the character, we may ask the question: Where’s the line? Well, the line is the same as where the line is with race. If gender is closely tied to the character, such as a hero who empowers other women like Wonder Woman and Mrs. Marvel, then the gender really shouldn’t be changed.

However, classic comic book characters such as Ironman don’t have that connection to a social issue that closely ties to their gender or race. The new Ironman comics don’t have Stark or another man playing Ironman. Instead, they’ve changed the character name to Ironheart, who is portrayed by a young black woman.

Spiderman has also gotten a new look as Spiderwoman, or Spider Gwen as she’s mostly known. Spider Gwen is a fan favorite and is a re-imagining of a classic hero.

Overall, if the character in the book isn’t tied closely to their culture, ethnicity or gender, then it’s not really a valid argument to say that the color of the actor’s skin or their gender has to be the same as the character’s since the comics have been changing that up for years.

Comic books have come a long way from just being propaganda for the country’s current war or just mind-numbing entertainment. Now they’ve become conduits for telling the stories of so many people. Now, we don’t see the story of one culture, or race or even gender. We are starting to see there are more stories out there.