DACA: Why it is necessary for America 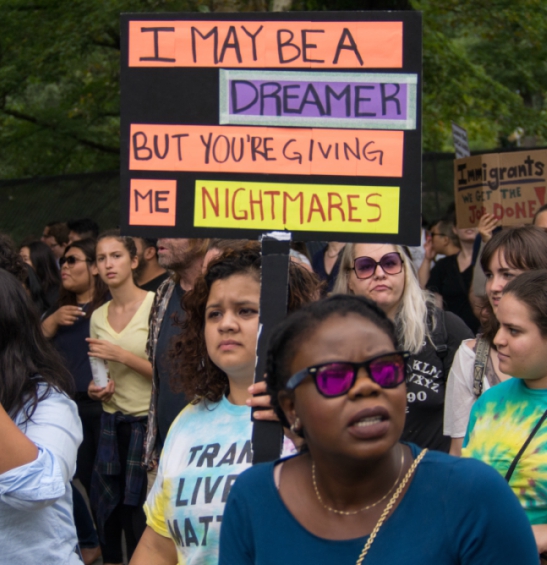 DACA (Deferred Action for Childhood Arrivals) has done wonders for thousands of young immigrants, yet the 689,800 futures are at the hands of a racist, uneducated president who is managing this country like a business.

Over the years DACA has given young immigrants an opportunity to become who they wish to be, no matter their status in this country. It has been a wonderful opportunity that not many had in the past.

Those who have benefited from the service are now at risk of being deported if the Republicans, Democrats and our racist leader Donald Trump, don’t approve or come up with a solution for them.

Getting rid of DACA would not only be bad for those who benefit from it, but for the entire country.

The Center for American Progress estimates that if DACA were terminated, it would cost the United States 460 billion dollars in the next 10 years.

According to a Newsweekly article, which shares some statistics about DACA, says, “Immigrants that apply to DACA must have come to the U.S. before they were 16 and they must have lived in the United States since 2007”. In addition, those who qualify for DACA, 80 percent of the recipients get licenses, and from all of those who get licenses, half of them became organ donors according to Newsweekly.

Terminating this program would put at risk lives who could get organs from DACA recipients. Not only are they here to help themselves and their families for a better life but they are also doing a part to help others when the chance arises.

As of Sept. 4, 2017 there are 689 hundred thousand active recipients of DACA according to Lori Robinson from factcheck.org. Not only do these 689,800 hundred thousand recipients go to school but they also work and give back to this country. They produce thousands of dollars for this country through their jobs, and that is without counting the cost of renewing their DACA that they pay every two years which is about 500 dollars per person.

The end of DACA could cause the country to lose more than 700 thousand employees in many fields. Can our country afford that loss at the moment? I don’t think so. Many DACA recipients produce thousands of dollars from their employment positions.

These people are not a threat to this country. They are here with hope for a better life and serve as a reminder that no walls can stop someone from achieving their life goals.

DACA started as a path to the American Dream but today it has the possibility to become the one thing that takes people further away from their dreams.

DACA recipients have become a bargain deal for his wall; A wicked move from the businessman that only reminds us of who he is, as a person and leader.