Editorial: Are we no longer our brother’s keeper? 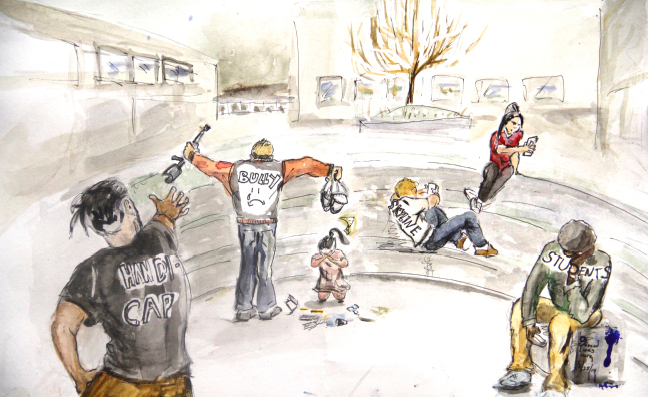 In our modern civilization, with humanity’s growing distaste towards violations of privacy being reflected in the laws of the land, we are faced with a horrifying truth: we, as a people, have become so preoccupied with honoring other’s “personal space” that we choose to turn a blind eye to acts of racism, bigotry, and even violence.

An experiment, referred to as the “THE BULLYING EXPERIMENT!” is a YouTube video created by fouseyTUBE, that has been shared and posted on numerous social media sites, including but not limited to Facebook and Twitter, in which two men, one playing a bully while the other is the bullied, get into an altercation in a college setting. The bully, verbally berating and physically accosting the bullied, is often times overlooked by passing students and even faculty with only a few instances of salvation in which we, the audience, get the chance to see someone taking a stand for a victim.

Will the privacy of another man or woman matter, at the end of the day, when they are responsible for the kidnapping of a child? Another experiment titled “THE KIDNAPPING EXPERIMENT!” also by fouseyTUBE, available for viewing on Youtube and Facebook, portrays a young boy asking people for help. The boy claims he is lost, that he doesn’t know where his parents are, and a strange man tried to force him to get into his van with him. Some of the men and women approached by the boy did intervene, but others chose not to get involved.

How many times are we told these days to mind our own business, to not get involved in someone else’s problems and look the other way? If we are witness to an act of violence or domestic abuse, we are not encouraged to intervene immediately to protect the victim, rather we are obligated to call the authorities and wait. In the time it takes for a state or federal officer to arrive to handle the situation, the worst could have occurred and the victim could be dead or dying. But we are encouraged to not get involved. If a child, or even an adult, is being forced into a vehicle or dragged behind a building against their will, shouldn’t we violate personal space boundaries and do something about it?

What is more important in our modern civilization? The life and safety of our fellow man, or the privacy and personal space of those who would seek to cause harm to others? The life of a mother, a father or a child could be dependent on the actions of a simple bystander. Rather than looking away for fear of getting involved in someone else’s business, we should make it our business. This is a call to action, to anyone and everyone: do not turn a blind eye. Do not be afraid. Make a stand, and your actions could be the spark that changes what has sadly become a socially acceptable norm.