Skyline will now prohibit all forms of tobacco on their campus 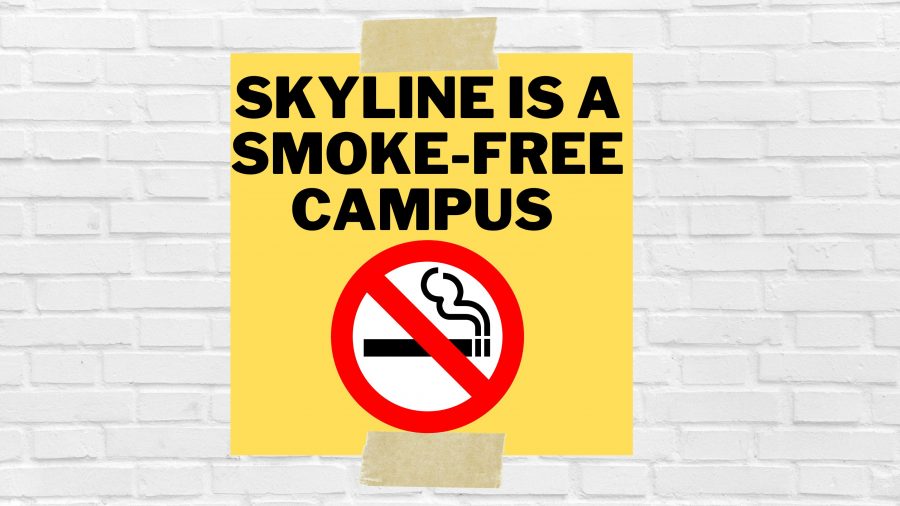 The Board of Trustees has voted against smoking on campus

Skyline College is now a 100% smoke and tobacco-free campus.

The San Mateo County Community College District Board of Trustees approved the revision of board policy 2.27 on Nov. 15. Towards the end of the meeting, non-agenda topics were open for discussion, which included conversation on the new regulation.

Director of Programs in Tobacco Control Janet Herbst expressed her support of the OnlyFog Project the Board of Trustees giving her reasons why Skyline should be a smoke-free campus. The Board voted unanimously in favor of the policy revision.

As students return to campus in the spring, they will see all nine designated smoking areas gone. San Francisco Community Health Center program specialist Mark Heringer and Professor Rika Yonemura-Fabian Ph.D are more than prepared to get the message out to students in the upcoming semesters.

“At the San Francisco Community Health Center, we are currently evaluating our work instead of advocating we are now in the process of implementation,” Heringer said. “We are currently working on to see how implementation would look like in the spring and fall semesters of 2022. There will be a transition period where we will let everyone know that this is now a 100 percent smoke-free campus. What this looks like is teeing off smoking zone signs and anything else that has any regard to smoking. We would have to put up new signs to notify everyone that we are now a smoke-free campus.”

“Only Fog is planning an event in Fall inviting many tobacco activists so students can learn more about the harms of tobacco,” Yonemura-Fabian said. “The impacts of tobacco on our students and their communities and what people are doing about it–and how our District is following the path of many other universities and colleges to say no to tobacco.”

Although the revision board policy has passed, Heringer and Yonemura-Fabian are ensuring that they will be present on campus for any smoker who may have concerns about removing the smoking zones and providing resources.

Ashley Alvarez, a business administration student at Skyline, has mixed feelings about the board’s policy passing.

“I do think the Board of Trustees did a good thing by removing the number of smoking zones we have,” Alvarez said. “I think the Board of Trustees should have at least approved to remove the 8/9 and save one very distant from the school buildings. I frequently smoke as a stress reliever especially during finals and the thought of having to leave school altogether to smoke just doesn’t sit right with me.”

Kaylee Arriaga, a Real Estate student at Skyline, believes the Board of Trustees made the right decision.

“The Board of Trustees made the right decision by approving the board policy,” Arriaga said. “I remember when I was on campus I would see people smoke and would get a sniff of the smoke. I absolutely hated that smell, I am glad I get to go to my class without having to pass by the smell of smoke.”

Heringer and Yonemura-Fabian also noted that tobacco is a social justice issue that needs to be addressed because it disproportionately affects the minority and the LGBTQ+ community.

If you or someone you know struggles with smoking or wants to quit visit Skyline’s Health and Wellness Center website to make an appointment through phone or email (650-738-4270).