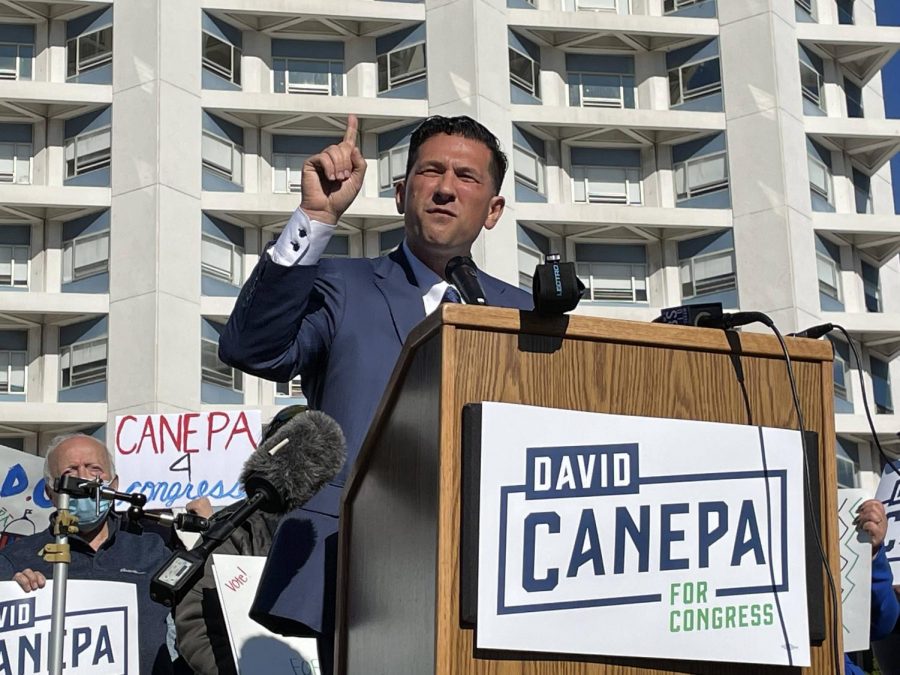 The fourth generation San Mateo County native was previously elected to the Daly City Council, a position he held from 2008 to 2016, serving as mayor in 2014. He has held a seat on the San Mateo County Board of Supervisors since 2016, currently as president.

In a press conference at Seton Medical Center, Canepa launched his campaign to replace retiring congresswoman Jackie Speier, who has held the seat for over a decade.

“We are running for Congress,” Canepa stated. “You notice I said we and not me, because that is what this race is about. It’s about amplifying your voice, voices in D.C.”

Canepa praised San Mateo County’s COVID-19 response while highlighting the constituents’ role in making it a success. He hopes to use the county’s model as a framework to bring to D.C.

“It’s about the values we hold dear in San Mateo County and congressional district-14,” Canepa stated. “I know without question, during this two-year pandemic, that we value public health.”

The public health theme was amplified by the announcement setting, Seton Medical Center. Canepa chose this background in part because he helped lead the charge against its closure over a year ago. The Supervisor spotlighted how the center acted as a COVID-19 command center and job provider for northern San Mateo County during the pandemic.

During the speech Canepa emphasized affordable healthcare, repeatedly claiming that it should be the nation’s top priority.

I’m running for Congress to get Washington, D.C., focused on the needs of our local communities, because I believe that if we can get the federal government to start investing in our neighborhoods, towns, cities, and counties again, we can restore America’s faith in government.

Canepa would go on to praise the district’s cultural and ethnic diversity, tying his family’s story to that of the district. He acknowledged the importance of the county’s Filipino community, the largest in the nation.

While the Supervisor highlighted money for small businesses, rental assistance, affordable housing and meal programs for the elderly as accomplishments achieved via local governance, special emphasis was put on the over $2 million pledged to the county’s community college promise scholars program.

The congressional hopeful recognized the long road ahead and the need to work hard.

“We are going to engage in a grassroots campaign that touches everyone from Redwood City to Brisbane to Daly City to everyone on the coast,” Canepa stated. “This is gonna be people-powered and we’re gonna make sure that we represent you.”

Canepa holds the belief that his campaign will have an edge in engaging young voters thanks to his stance on community college.

Canepa will need every advantage he can get in what could shape out to be a crowded primary field. State assemblymember Kevin Mullin and Burlingame councilwoman Emily Beach are expected to join the race as well.