The COVID-19 pandemic has caused an uproar of change from an education standpoint. 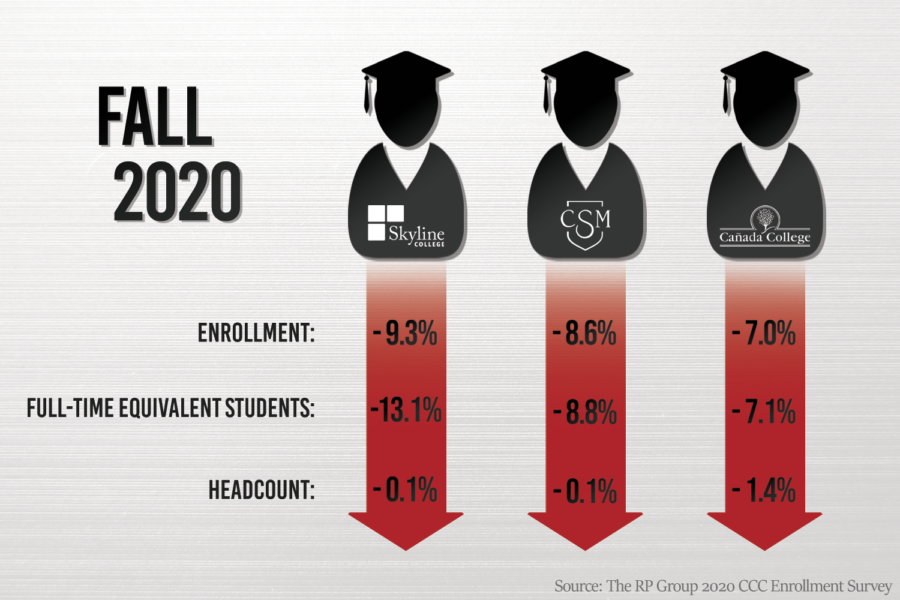 Skyline College has had a slight increase in the number of enrolled students for spring 2021, but has lower enrollments in courses this semester

It has been more than 365 days ever since the San Mateo County Community College District (SMCCCD) decided to suspend face-to-face learning instruction as a precaution against the threat of the COVID-19.

Cherie Colin, Skyline College’s director of community relations and marketing, revealed that there had been a decline to the number of enrollments and full-time students across the district’s three campuses for fall 2020.

In contrast, Skyline College has had a slight increase in the number of enrolled students for spring 2021, but has lower enrollments in courses this semester, which school officials suspect “has something to do with the pandemic.”

“In both fall 2020 and spring 2021, course enrollments were down by 9.3%, at the same time that the total number of enrolled students rose,” Colin said. “This means that while the college had more students, on average, those students were taking fewer classes.”

She also wrote that several events such as the 50th Anniversary of the Skyline College and the annual president’s breakfast were cancelled due to the pandemic.

Even after a year, students can still vividly remember their last days on their campus which they hope to do again once the situation is better, if not, safe.

Communication studies student Oliver Tinoco remembers the days when he was still coming to the campus with his friends. He described grabbing food or drinks from the Fireside Building and hanging around outside and on the grassy steps located at the heart of the campus. If he wasn’t doing that, he would likely be seen at Building 5, in the Learning Center or at the library, getting in his hours for his Promise Scholars Requirement.

Tinoco was appalled by the notion of classes having to transition online. He was very much looking forward to his class on the sociology of sex and gender, as it related to his interest in social justice. With his fervent advocacy standing up against the injustices that LGBTQ people and members of racial minorities face, Tinoco got involved in Sexuality and Gender Alliance (SAGA) and Fighting for Immigrant Rights & Equity (FIRE) and is now the president of both of the student organizations.

Tinoco and Cheryl Johnson, the dean of student equity and support programs, were working on establishing a Pride Center, which later evolved into an Intercultural Center, which has been operating virtually for some time now.

“It was in talks of sort of setting up a space that was a visible Intercultural Center that welcomed student life,”
Tinoco said. “And that was aimed at being a space for different students — for Native American students, black students, LGBTQ+ students, to just to have that sort of space that recognized the demographics.”

FIRE has been reaching out to students from the College of San Mateo and Cañada College with the goal of making it a “districtwide group.”

As a student, Tinoco said he was “lucky” to have had professors who have been flexible and have catered to students’ needs since spring 2020.

“(Throughout) the semester we left, last semester, and this semester, I have always had amazing professors who are accommodating, who are personable, who understand what students are going through,” he said.

Given the circumstances, Tinoco planned to extend another school year at Skyline and take classes he thinks that would be “harder in-person.”

Colin said that moving forward, that there will be a commencement exercise for 2020 and 2021 that will be held virtually this May with the date to be determined soon.

“We have just hired a company to help us to celebrate students in the most engaging way possible online,” Colin said. “We are so proud of our graduates, and want to offer the opportunity to last year’s grads as well.”

As for Tinoco, he is looking forward to giving his friends a hug once the situation is better.

“I’m not that friend who likes hugging people who does all that,” he said. “However, the second we’re allowed to all of my friends are getting the biggest hug.”