First time applicants are being accepted for DACA 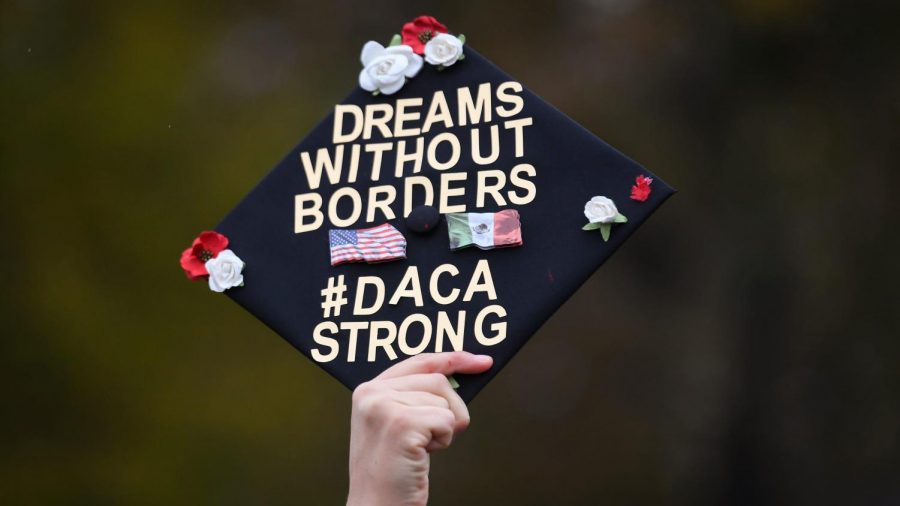 The US District Court in Brooklyn issued the Wolf memorandum as invalid. Chad Wolf was not legally in the position of acting secretary of homeland security when he issued the memo. Judge Nicholas Garaufis directed the administration to reverse the memorandum as soon as Monday.

“I’m open to new recipients receiving DACA — It’s definitely helped me a lot with school,” said Denisse Contreras, Skyline student and DACA recipient. “For example, I get to receive in-state tuition by just filling out the AB 540 form. I’ve been here since I was 3 years old, so if anyone else has a similar situation, I’m happy they’re getting the help they deserve to be successful in school or in a job.”

A judge in New York ruled for DACA to return to its original form before any changes from the Sept. 5, 2017 recession memo. DACA recipients are now able to apply for the first time. You are applicable if you came to the US before the age of 16, are in school, graduated high school, have a GED, continued to live in the US since June 15, 2007 up until the present day, under the age of 31 since June 15, 2012, are a discharged veteran of the US Coast guard or US armed forces, or are free of a felony or misdemeanor.

DACA stands for Deferred Action for Children Arrivals. DACA protects young immigrants from deportation and allows immigrants a workers permit. Under DACA, a social security number that can be used for life is given out. Other benefits include permitting for a driver’s license and college financial aid.

President Trump initially sought out to end DACA on Sept. 5, 2017.
“When Trump set out to cancel DACA, I was mostly worried about my mom (my only family), because at the time, she was being threatened with being fired for not having papers or a work permit,” Denisse Contreras said. “With DACA, I would be able to step up and provide for her if things changed. A lot of the benefits DACA provides are not only for me — They are for everyone around me. I have a lot of friends who have better paying jobs than their parents and help them pay bills, etc., just by having a work permit. I had a lot of professors at the time as well telling me that they were willing to help me if things did change. Although it’s been a scary four years of anxiety, I’ve had to learn how to live with the feeling of having DACA taken away from me any given year.”
Chad Wolf, acting secretary of Homeland Security, issued a memo that new DACA recipients will not be accepted, reject any new and pending requests for parole and limit DACA renewal to one year rather than two years as of July 28, 2020. Wolf’s concern to limit DACA was to stop further immigrants from traveling to the United States.

“Even though the Supreme Court decision reinstated DACA, the federal government under the Trump administration issued a memorandum stating that the United States Citizenship and Immigration Services will reject initial DACA applications,” said Maria Segarra Gaudio, supervising attorney at Skyline College. “The memorandum also shortened the work authorization for DACA holders from two years to only one year. This is frustrating!”

On Nov. 14, 2020, District Judge Nicholas Garaufis canceled Wolf’s memorandum due to Wolf not lawfully serving as the acting secretary of the Department of Homeland Security.

The memorandum withheld any new DACA applicants and restricted DACA renewals to once a year rather than every two years. The effects of shortening the renewal are family members of three or more now have to find the means to make $495 for each person in a household each year. If DACA was canceled, the US could lose up to $21 billion, according to justiceforimmigrants.org. DACA recipients pay taxes, contribute to the workforce, create jobs and act as consumers.

Trump’s administration tried to cancel DACA. On Oct. 15 2020, during one of the presidential debates, Trump was asked if he would pursue cutting back on DACA during his next term if he were to win the election. Trump said the reason why DACA changed renewal dates to every year is due to the spikes of coronaviruses in Mexico.

President Trump’s administration had a policy that resulted in parents being separated from their children. Parents were deported back to their home country or detained. The children were scattered and put into foster care, or sent to live with relatives. Some of these children are yet to be reunited with their family members.

Trump’s administration has made it difficult for immigrants by targeting them. Nov. 1 is known as Dia de los Muertos in the Hispanic community, but President Trump proclaimed that date to be known as “National Day of Remembrance for Americans Killed by Illegal Aliens”.

“It has been a challenging few years,” said Pamela Ortiz Cerda, the DREAM Center program service coordinator. “With policies changing so much, it forces us to be proactive and reactive, because things that are affecting our students were coming down the pipe, so often we had to be understanding of what’s happening and see how to help.”
“Hopefully DACA is here to stay but develops into something more,” Contreras said. “The requirements for DACA can also be somewhat mentally tiring because you have to be the perfect candidate for a portion of benefits, paying for school and paying taxes (having a job) profits the government probably way more and the economy than us so hopefully they realized that this is all we know and that we deserve more.”
The judge’s ruling on DACA is current as of now, and this is the time to apply as a first-time recipient. If you are in need of support, the DREAM Center does DACA renewals and helps find scholarships for the $495 fee.

You can apply by sharing evidence of meeting guidelines such as ID, filling out USCIS form I-821D and I-765, mailing it and paying the 495 dollar fee. For further information visit USCIS.gov/childhood arrivals.

Skyline College has a Legal Clinic free to the community, students and staff on Wednesday nights. If you have a Legal question contact Maria Segarra Gaudio supervising attorney by email [email protected] or phone number (650)-738-7035.

Reach out to the DREAM Center at Skyline for further resources or immigration questions [email protected] or leave a message at (650) 738-4220.