SFUSD advocates for schools to be renamed 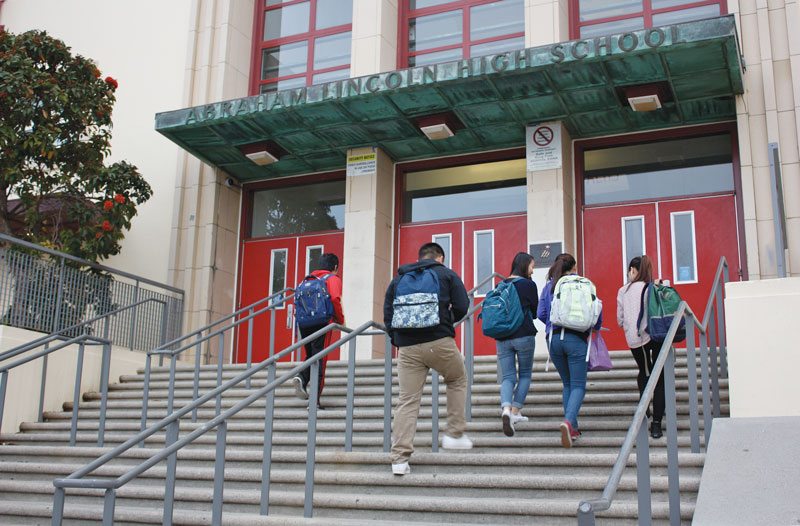 Abraham Lincoln High School in the Sunset District is among the schools that was deemed to meet the advisory committee's criteria for those that should have their names changed.

Editor’s note: This article has been updated since its original publication.

New changes could be coming to schools within the San Francisco Unified School District (SFUSD), as a district-created committee is calling for roughly 40 public schools in the city to be renamed.

The School Names Advisory Committee, which was established December 2019 (the resolution having been passed in May 2018), is seeking the revision after receiving numerous petitions from school community members to the SF Board of Education. The renaming proposal comes after the namesake of every SFUSD school was historically investigated by the committee and revealed that many of them failed to meet the new guiding principles policy, which was a list they approved on July 17.

The guidelines state that the committee will look to change the names of schools that are named after the following:

Anyone directly involved in the colonization of people.
Slave owners or participants in enslavement.
Perpetrators of genocide or slavery.
Those who exploit workers/people.
Those who directly oppressed or abused women, children, queer or transgender people.
Those who connected to any human rights or environmental abuses.
Those who are known as racists and/or white supremacists and/or espoused racist beliefs.

Abraham Lincoln High School in the Sunset District is among the schools that was deemed to meet the advisory committee’s criteria for those that should have their names changed. According to their report, Lincoln is responsible for the Dakota War of 1862, which is considered the largest mass execution in US history.

Dianne Feinstein Elementary School also came under fire after the board found evidence that Feinstein flew a Confederate flag outside of city hall during her tenure as Mayor of San Francisco.

“This advisory panel is responsible for considering the relevance of school names and appropriateness of these names when they honor historical figures,” said SFUSD Public Relations Director Laura Dudnick. “The task force will make recommendations to the Board of Education for further action. Any final decision to change school names rests with the elected members of the Board of Education.”

The individual school communities are tasked with coming up with up to two new names to present to the board by December 18. The status of schools who independently refuse to change their names is currently unclear.

The committee meets on Zoom due to COVID-19, the most recent meeting having been held on October 7.

“You’re taking a lot of flak — obviously the board will too as it moves forward — but we’re prepared,” said SF Board of Education President Mark Sanchez during the meeting, addressing the advisory committee. “This is a very diverse board, a very progressive board, and we are in a time right now where this kind of work has to be done for all of us.”

Sanchez is one of the leading supporters and a co-author in formulating the plan for the committee. In 2000, he was elected the first Green Party member and the first openly gay Commissioner to serve on the Board of Education in San Francisco. He is seeking re-election in the upcoming November elections.

SFUSD Superintendent Dr. Vincent Matthews is also among the top names in support of the change.

In a letter to both officials on October 8, Alumni Association Presidents from Balboa, Galileo, Lincoln, Lowell, and Washington High Schools expressed opposition to the plan, in partnership with the Save School Names Committee, which stands firmly against the movement. They have also held meetings over Zoom and have been in ongoing discussions with SFUSD officials and schools.

“School names should reflect the community’s values, but the activities of your School Names Advisory Committee undermine the opportunity for a legitimate conversation about the appropriateness of the schools’ current names and, more critically, raises questions about how you are managing students’ educational needs,” wrote the Save School Names Committee in their letter to Sanchez and Matthews.

According to the Save School Names Committee, the adjustments would cost the district roughly $9 million ($150-$200,000 per school). They claim that the amount of money spent on the name changes would force many faculty and staff out of a job, as payroll would eventually need to be addressed for the district, which is actively over-budget.

They have also been critical of the advisory committee’s lack of historian presence or diversity to represent San Francisco.

“There is an old saying: ‘Don’t reinvent the wheel, make it better!’”, said Toni Alstad, a Lincoln High School 1958 alumnus and member of the Save School Names Committee. “History is history, but we should learn from it, not erase it. There is no value in changing a school’s name if the students don’t understand or know why. There is value in educating our students.”

According to Sanchez, the Advisory Committee is behind schedule due to the COVID-19 pandemic, so decisions will likely be sped up in an effort to complete the transaction this fall. The goal is for them to send formal recommendations to the Board of Education in January 2021. Meanwhile, the opposition committee envisions a weak five-year plan and many different concerns and flaws to the process.