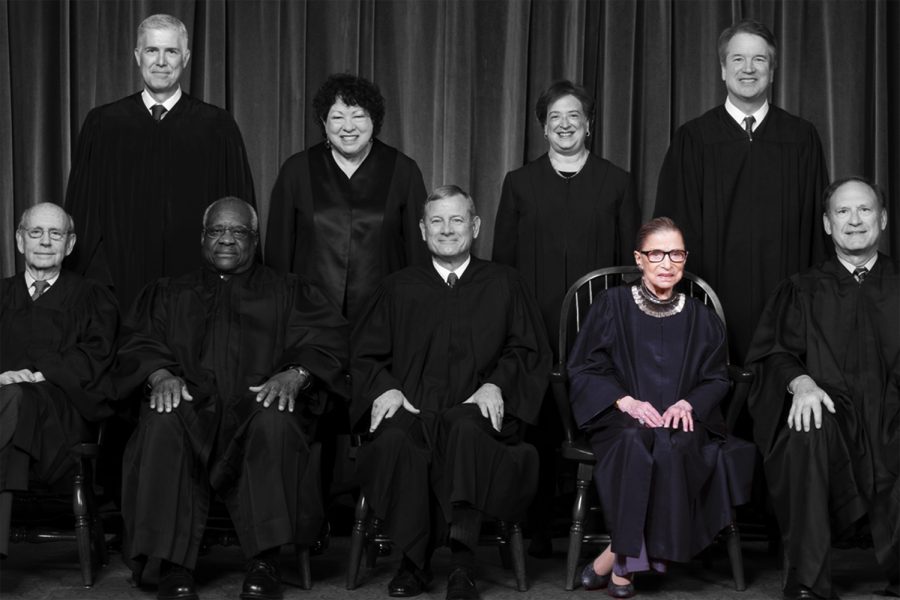 Fred Schilling, Collection of the Supreme Court of the United States

Ruth Bader Ginsburg, the second woman to hold a position on the Supreme Court, has died today in her Washington D.C. home at the age of 87 after a long battle with metastatic pancreatic cancer.

With less than 50 days until Election Day, questions arise about who will be responsible for selecting her replacement, and if Senate Republicans will allow her vacant seat to be filled before the results are in. Mitch McConnell blocked President Barack Obama’s nominee Merrick Garland from taking the bench in 2016 due to proximity to the election. Hours after Ginsburg’s death today, Mitch McConnell released a statement saying they’re going to go for the nomination before the election.

Ginsburg earned a bachelor’s degree in government from Cornell University before attending Harvard Law School and eventually transferring to graduate at the top of her class from Columbia Law School in 1959. There, she became their first tenured female professor in 1972. She is the first woman to have been on two major law reviews, Harvard Law Review and later the head of Columbia Law Review.

Ginsburg was nominated by Bill Clinton in 1993 to fill the seat vacated by Justice Byron White upon his retirement. During her time on the court, she went from being viewed as a moderate choice to championing many progressive issues.

United States v. O’Hagan 1997
This ruling helped establish a clearer definition of insider trading, or “trading on undisclosed information in the tender offer setting, even in the absence of a duty to disclose”.

Olmstead v. L.C. 1999
Under the Americans with Disabilities Act, this decision determines that states are “required to place persons with mental disabilities in community settings rather than in institutions …”

Friends of the Earth v. Laidlaw Environmental Services 2000
This decision determined that residents near a South Carolina river had the right to sue a company due to its pollution.

Timbs v. Indiana 2019
Ginsburg wrote the ruling for this case while recovering from surgery from lung cancer in 2019. It determines that state and local governments are subject to the Eighth Amendment ban on excessive fines. In this case, Tyson Timbs had his Land Rover confiscated under forfeiture law after pleading guilty to selling heroin to undercover police.

Ginsburg is survived by her two children Jane Carol Ginsburg and James Steven Ginsburg, four grandchildren, and one great-grandchild.