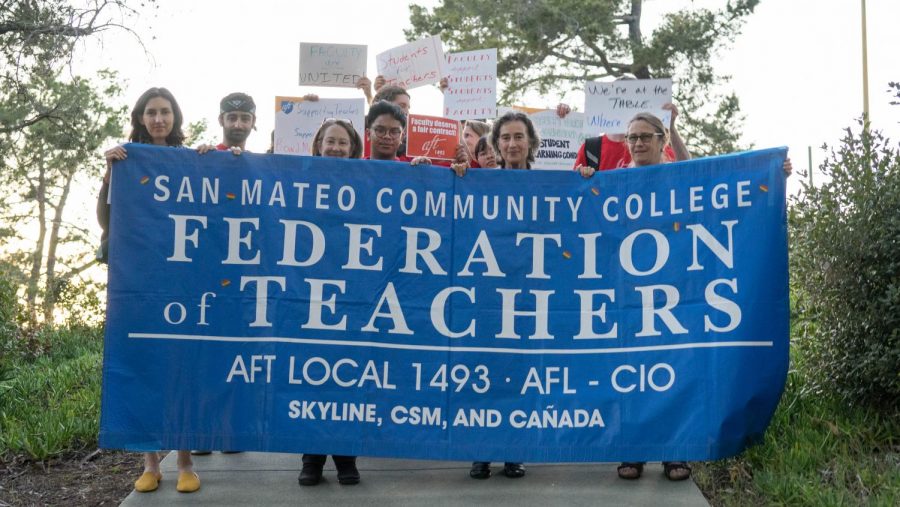 AFT members (Katharine Harer) and supporters marching to the district board meeting in protest for fair pay. February 26, 2020

Teachers’ union and students marched down to the Board Meeting at the College of San Mateo (CSM), on Feb. 26, protesting about numerous concerns and issues impacting their work conditions. Their goal for the protest was to increase pay, compensation, and benefits.

Younga Choi, a mathematics professor at Skyline College suggested making the classroom sizes smaller for professors to have more connections to their students. She also talked about how teaching multiple units and having to grade each student by using Canvas as a platform can be challenging for some professors.

“We are also teaching 30 credits per semester. I have full rosters using it in the Canvas, it is not really fun,” said Professor Choi.

Kolo Wamba, a physics professor at Skyline College, pointed out the deficit and discrepancy of the part-time faculty compared to full-time faculty with regards to pay and benefits despite doing equal work.

“Part-time faculty still at best earn only about 70 percent of what full-timers get on an hourly basis and we don’t get the same health plan. Ours isn’t even really a plan. It’s partial insurance reimbursement, and many of us don’t even qualify because we use too few units,” professor Wamba said.

Professor Wamba also mentioned how the union’s proposal toward pay equity and workload compensation would secure parity against the gender pay gap.

Before professor Wamba ended his turn, he left a message to the Board Members.

“You have the means, the motive and the opportunity to at least take a baby step or the right side of history. And I urge the board to take this matter very seriously,” he said.

EJ Unisa, a sociology major and campus Ambassador at Skyline College, spoke before the Board, representing the student body on his behalf. Unisa sympathizes with the plight faced by the faculty.

“Now what is said, ‘not to bite the hand that feeds you.’ But how can I feel confident in my own success and the success of my peers and community, knowing that my professors and counselors are fighting for fair treatment?” Unisa said.

By having the negotiation settled, Unisa believed that the decision would make a huge impact in the history of education in California.

“I know that if you settle this contract with the faculty fairly, it will send a grand precedent for the future of education itself,” Unisa said.

According to the AFT 1493, the Skyline College is under violation of the “50% Law”, having reserved only 42.4 percent of the total allocation of the funds for the “salaries of classroom instructors.”.

In an email correspondence with AFT-1439 Vice President Katherine Harer, she said that the union was not yet able to involve as many students since they focused more on the faculty’s plight for contract fight, yet union organizers have begun to reach out to students directly to let them get more involved.

The Skyline View has reached the Board President Karen Schwarz and Interim Chancellor Michael Claire and both said that they are currently engaged in an ongoing negotiation therefore it is inappropriate to give comments.

Students and faculty were also given an opportunity to speak to the mic and represent other issues.

“I think we need creation for a faculty disability resource center. I hear this over again over resources. We have none, nothing, so we can do that,” said Anthropology Professor Lori Slicton.