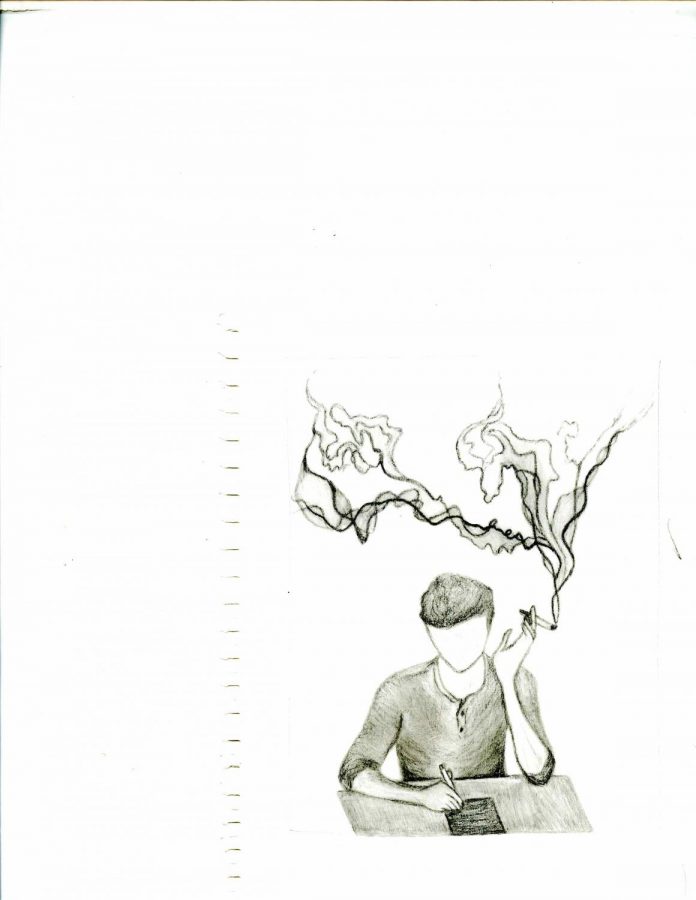 The balance of Smoking and Making Grades

From the time a child enters grade school the thought of drugs and alcohol is shown in a negative light. As those students grow older, schools embed the idea that smoking marijuana will not lead you to success. Transitioning from high school into college these stereotypes are already in the mind of students. They hear negative connotations such as, “Look at those potheads, they are lazy couch potatoes who will never succeed in life.” According to a 2018 article written by Morgan Sherburne in the University of Michigan News site, marijuana use has been up at it’s highest level in the past three decades. Study shows that 38 percent of college students from the age of 19-22 have admitted to smoking marijuana. For Skyline the point of views of a student, counselor and a dispensary employee to understand if the Scholarly Stoner actually exist.

How a Counselor Sees It

Perry Chen, personal counselor at Skyline College, was asked his opinion on students who come to him and admit to substance use.

“We do have assessments around substance use. While we never condone substance use we do find that people are functionally using,” Chen said. “Part of our job is also to suss out, is it something that is interfering with their normal functions? Whether it is marijuana or video games or anything else… when it starts to interfere with their normal functions, like our social lives, our academic live, our work lives then that might be the problem.” I took out a few extra words in this quote, check to make sure it is okay

Perry Chen looks at how substance use is not the only thing that can interfere with a student’s success; instead there are many factors that can hinder a student’s progress. He believes that we all have vices– whether its marijuana, social media or Netflix we all have these distractions but it does not mean we are bad. Chen believes that as long as we’re able to maintain our functionality and keep with the things we need to keep up with.

Elias Paredez has been studying full time for three semesters. Friends close to Elias know he loves to smoke and know exactly what he’s smoking. From 2015 to 2016 however, Elias was not the best student, failing most of his classes and leaving on bad terms. He later discovered he can make up the grades. Paredez has been committed to Skyline College for three semesters, and subsequently became a member of the Dean’s List. I reworded this so make sure it is okay

need confirmation that this is the correct quote!“I needed to educate myself,” Paredez said. “I needed to come back for a better career, the past three semesters I worked my ass off with a full time job, and still smoking and being able to take care of my family.”

This is Paredez’s motivation as to why he needed to return to Skyline and his former bad grades and his marijuana use were not going to stop him. Since seventh grade, Paredez has chosen to smoke. Although he has slowed down, it will not be the end of smoking for him.

“I used to smoke like, three packs of woods, hella joints, hella bong hits and now I’ll just smoke my pen in-between classes so I don’t have a full anxiety attack and get hella nervous. I only take a couple puffs and when I get home that’s when I’ll smoke a lot,” Paredez said.

Here, Paredez shows how he slowed but also why he needs to smoke. Being a college student can be nerve racking. Students arrive to the semester not knowing what to expect in new classes. As the semester goes on the pressure changes to whether or not a student will pass the class. Smoking can really help a student ease the pressure they face, but not every student can choose smoking and and handle the balance.

“There’s a lot of people who procrastinate especially when they smoke, they’ll reminisce on wanting to do this and that but weed is not that important,” Paredez said. “It’s just there, but with work and educating yourself that’s something that’s not always going to be there so you need to get that first.”

The Dispensary Point of View

“I think it all depends on the person and what they’re capable of accomplishing. You can have one person who smokes weed and they get lazy so they become unproductive. While there can be another person who smokes weed to relax their anxiety and it helps them focus,” Zenya Alvarez, who works at the Apothecarium a dispensary located in San Francisco said.

Alvarez, also attends City College of San Francisco was asked for her opinion on students who choose to smoke.

“I’m not saying all people should smoke weed, but people should try to understand what it does for people instead of judging it based on what they’ve heard or seen on the media. Everyone experiences things differently,” Alvarez said. “I can only speak for myself. Not saying I’m always smoking weed while I do things, but I do it in moderation. ”

Alvarez believes that as an adult you should understand your limit and your own body. Knowing how your body works can help you and the amount of it handle can help students understand the balance of smoking and studying.

Alvarez brings more self-awareness to the subject that it should not be about stereotypes surrounding marijuana users. Instead, it should be about whether or not that student can handle it. Students like Paredez and Alvarez show there is a possibility of balance. What Chen, Paredez, and Alvarez opinions all have in common is that is does not matter about the drugs or stereotypes, but it is about the person and if he or she have the will power and motivation to balance