Human Library Comes Back to Skyline 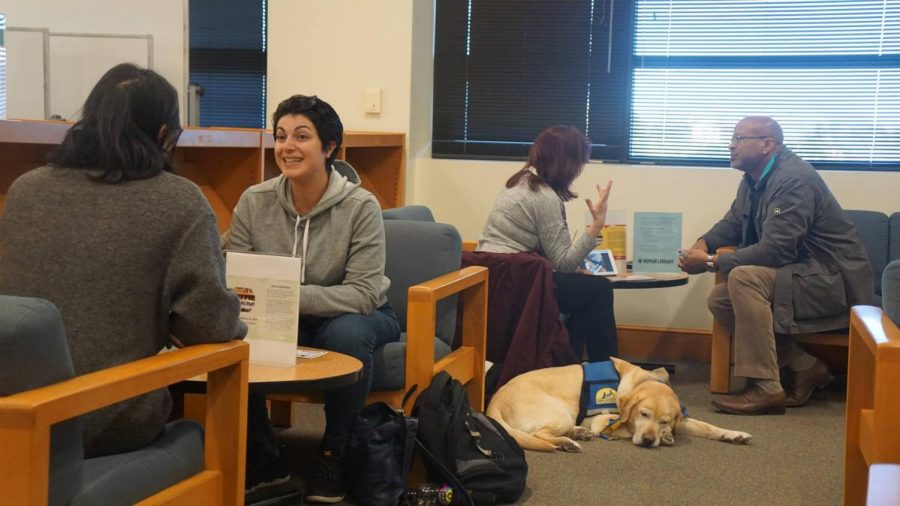 There’s a story behind every person. As the adage goes, “Don’t judge a book by its cover.” Skyline College hosted the first Human Library on Feb. 21 in the library.

The Human Library is an international organization and movement that originated in Copenhagen, Denmark in 2000. Ronni Abergel – a young man living in Denmark witnessed his friend being assassinated due to a racial dispute, which let him consider the issue of ethnic conflict and set up “Stop the Violence”. This organization in Copenhagen was created to promote anti-violence, encourage dialogue and build relationships through face-to-face communication with real people’s story to dispel misunderstandings. Since its inception, this concept has been extended to 50 countries and more than 200 Human Library events have taken place in all over the world.

“As we finished the February Human Library, we’re applying to do one in March and going to do the larger one in April which will extend the event from two hours to four hours.” says Walawalkar.

“The way we do Human Library is, one reader can read a human book or have a conversation with human book for half hour,” said Walawalkar. “In two hours, about 19 people who want to talk and share the experience; it’s been very successful.”

Raymon Gutierrez, the retention specialist in the Learning Center is one of the speakers and it was the second time he shared his story.

“I feel the human library is a great service that provides information to students to really get down the person themselves; the great thing that human library does, [it] allows an individual to share the story about life, the struggle that they deal with so students can relate to them,” said Gutierrez.

As the second time being involved in the events, Raymon felt excited to share his story again.

“With the last 2 years, I learned a lot from being here in this college and from students, so I can tell my story and my current struggle in town that we are all learning together, and I want to share that new information with them,” Gutierrez said.

In addition, Jeremy Evangelista, a Program Services Coordinator in Financial Aid at Skyline was another speaker this time. He recognizes that Human Library not only benefits students, it also is advantageous for speakers.

“I think in Human Library, I get to learn more about students on campus because it is a very conversational experience, it’s not just me talking and I was able to learn about students,“ Evangelista said.

Nazanin Nematollahi, a student from Iran who attended the event, feels she was inspired by one of the speaker’s story in Human Library.

“After attending to the Human Library, I learned I’m not the only person in the journey of the immigration and there are more people with the same obstacles to share,” Nematollahi said.

Human Library is a good activity for students to get experience from another’s point of view. If you’re interested in attending Human Library this semester, you check the student calendar for upcoming events.