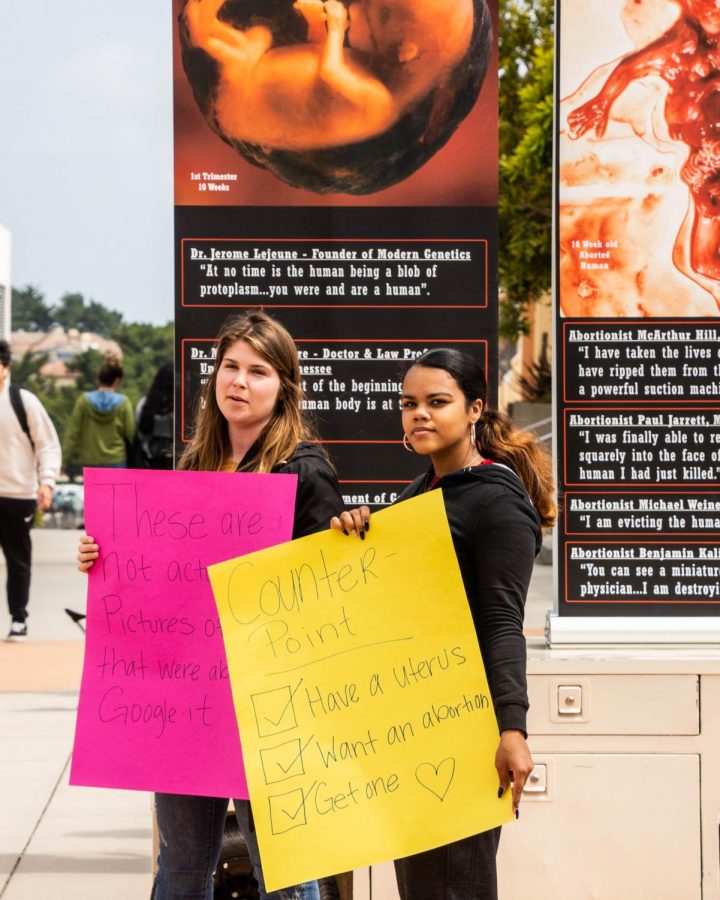 College campuses are known for supporting differing opinions and ideas, but on Monday, Aug. 27, a different idea was displayed on the main campus in front of Building 6.

Tall graphic images stood in the quad of unborn fetuses and “abortion aftermath.” Pamphlets were strewn about the campus and those handing them out were walking around to passers-by to explain their reasoning.

Member of The Truth Project John Edgar said that “the goal is to educate students on the humanity of the unborn child & the inhumanity of abortion.”

Edgar proceeded to explain that their group has been to 300 college campuses in the U.S. and they have experienced good and bad reactions through them all.

Edgar has a personal connection to anti-abortion activism as his family has gone through the difficulties of “abortion regret.” He states that he didn’t intend to make people angry, nor to harm anyone. He wanted to inform and communicate his story to those who will listen.

Don Blythe is another member of their anti-abortion team who mentions that there are rules to being on our campus as an organization, for example, no blocking walkways and no physical interference. Regardless of what their message is, it’s their First Amendment right, as each member of their group mentioned.

The pamphlets, on the other hand, struck a chord with anyone who flips through them.

”Not all of our sources are cited in our pamphlet,” Edgar

Although, Blythe said, “All of our sources are cited, we go out and do research. People are telling us ‘well it’s not a human being yet’ and we did our research.”

Don said that the medical textbooks had shown that when the sperm and egg come together it is “officially” a human being. Ricki Lewis Ph.D., a biologist who also writes college textbooks on Biology, wrote an article for the DNA Science organization in 2013, which states that, “A 4 or 6 week prenatal human is not a fetus — the difference is not arbitrary, it has biological meaning.”

In the same article, Lewis also wrote, “My goal was to provide biological information because I am a biologist. I left the philosophy and bioethics for others.”

Yet Blythe explained that, when someone states that the fetus is not a human being, “they are factually incorrect.”

“I wasn’t going to say anything to them, I was just walking by, I had my pro-choice sign and one of them said to me, ‘Oh, so you’re a baby killer?’” said Hailey Center, a student at Skyline, who was holding a pro-abortion rights sign, next to the anti-abortion group.

Center was quiet while she was standing with her sign and felt unwelcome in her school. She spoke out about how she and others were feeling towards The Truth Project members.

“You’re making people cry, making them feel unwanted at school, is that really what we’re here for?” said Center to The Truth Project members. She also added, “Making abortion illegal will not make it go away, it will make it unsafe.”

Many students were affected and triggered by the people of Project Truth. The content that they came with, that being the images or stories were graphic to many on campus.

Don Blythe, explained that the images were there to scare people and to prevent future abortions because of how ugly the graphics were.

“They are shaming people for making their own choice, There are children from the Child Care Center walking around here, there was a student hiding in the back, crying, because of these images.” said Stephanie Thompson, a student who had a pro-abortion rights sign as well.

Susan Stack, another Skyline student, questioned an anti-abortion team member who refused to respond to her. She asked him questions about how they had found the information on Planned Parenthood and he proceeded to tell her she was a nuisance and wouldn’t respond otherwise.

“If you’re going to stand on a college campus filled with intellectuals with strong opinions, you should come prepared to support yours instead of pushing back.” Stack said.

Susan also mentions the “swarming” of these team members. When she would start a discussion with one of them, they all circled around her. If their actions were clearly steered towards sharing information instead of forcing information, Stack said her reaction would have been different.

This article has been updated to reflect the correct name of the organization, Project Truth.