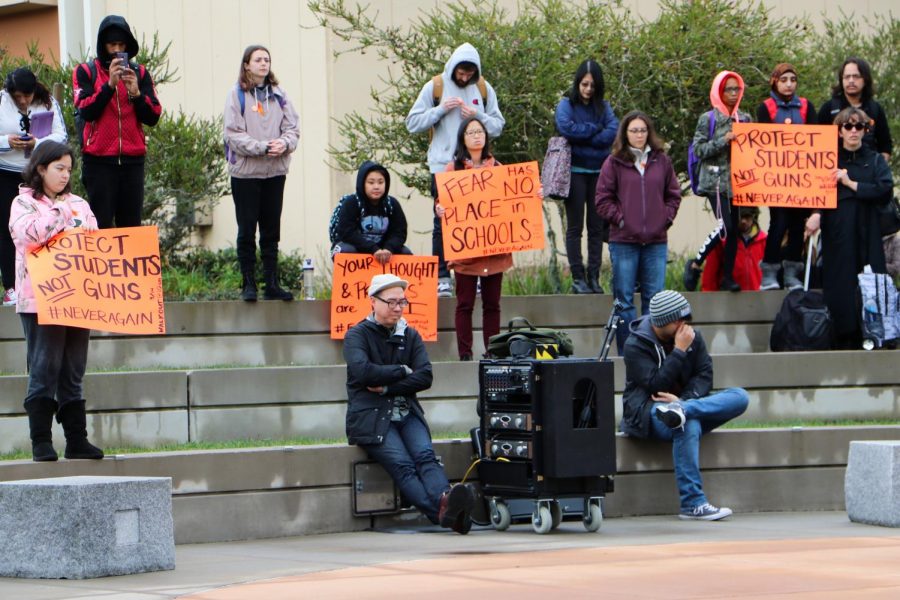 Members of Skyline College take a 17-minute moment of silence to honor the 17 victims of the Marjory Stoneman Douglas High School shooting on March 14, 2018, one month following the tragedy.

The Skyline College quad was lined with students and faculty who turned out to show their support for the victims of the Marjory Stoneman Douglas High School shooting 10 a.m. on Wednesday, March 14.

Members of the ASSC passed out orange buttons reading “#NEVERAGAIN” and orange ribbon pins. Why orange? The family of Hadiya Pendleton—who was shot and killed in Chicago at 15 years old— started the organization “Wear Orange” with the website stating, “We wear orange for Hadiya and to honor the more than 90 lives cut short and the hundreds more injured by gun violence every day—and to demand action.”

Organized by the Women’s March Youth Empower, the walkout was a call to action for Congress to ratify legislative change to the current gun legislation.

While the national walkout has been planned and worked on weeks prior, some Skyline students weren’t aware of the walkout until large orange signs created by the Associated Students of Skyline College (ASSC) were posted around campus on March 9; more similar signs were handed out for people to brandish.

Before the walkout began, biology major Jordan Fuller was unsure of the walkout’s ability to spark change in the government.

“At the end of the day, it’s the government’s choice,” Fuller said. “We can only do so much. No matter what we do, it’s not even really up to us, even though we say it is.”

Skyline student Alexus Smith was optimistic that the walkout could prompt change.

“It’s a good way for us to put more awareness out there,” Smith said. “Kids can come together and hopefully that will open more people’s eyes and make them realize that it’s not just something that just happens and everyone forgets about it. People are trying to achieve things that will actually help the world.”

Additionally, on March 12, ASSC sent a mass email to all Skyline students and faculty regarding the walkout. With a few modifications, this message was retold by ASSC Vice President Christine Abella at the beginning of the protest and additional remarks.

“We, the Associated Students of Skyline College, stand in solidarity with the students of Parkland, Florida and all those affected by preventable acts of violence nationwide,” Abella said. “We find it deplorable that Congress can proceed without action and hope to enable the student body to constructively act on their beliefs and to contribute to an essential nationwide dialogue.”

Abella addressed the potential misinterpretation of the ASSC statements.

“Our statement must not be misinterpreted,” Abella said. “Our goal is not to force our peers to conform to a single political stance or rid of all guns in general. Our mission is to promote discussion, involvement, and awareness of these issues because we cannot ignore what is going on today. We want change and we demand action. At the end of the day, we need to prioritize our students and our community.”

After a message from the President of Skyline College, Dr. Regina Stanback Stroud, a 17-minute-long moment of silence ensued–one minute for every victim of the Marjory Stoneman Douglas High School mass shooting exactly one month before.

“The students are our teachers today,” Stroud said. “They are providing leadership on a very critical issue. They are saying to us that they need to be able to sit in classrooms and not have to fear for their safety… While they stand in solidarity with their colleagues and students across the nation, we (the teachers) want the students to know we stand in solidarity with you.”

The walkout was curtailed with a final message from Abella.

“This is not all we could do to demand action at the federal level. I encourage students to vote, take the time to your representatives, and send letters to the victims of the Parkland shooting.”