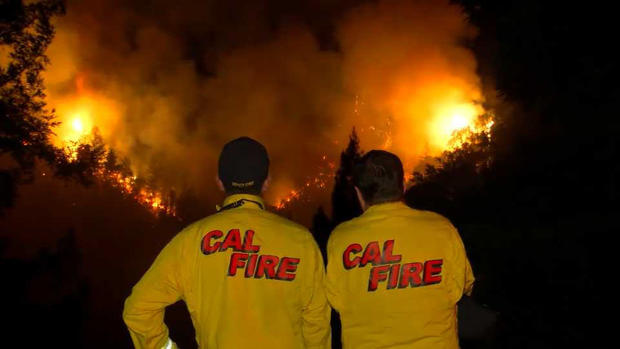 Santa Cruz suffered from a series of fires in California, on Bear Canyon Road and Deer Creek Road in Boulder Creek.

The Boulder Creek fire began on the night of Oct. 16th and has burned through 391 acres, destroyed four structures and 90 percent of the fire has been contained as of Tuesday morning. The cause of the fire is still under investigation.

California Department of Forestry and Fire Protection (CAL FIRE), the fire department for both Santa Cruz and San Mateo County, has a multitude of methods to contain fires, including water, fire retardant drops, and fuel reduction among several thousand acres. This is done either mechanically or with prescribed burns. With their efforts, CAL FIRE has been able to catch 95 percent of their fires and keep them at ten acres or less in circumference.

This could be attributed to the resources at their disposal.

“CAL FIRE has one of the largest fire fighting air fleets in the world.” said CAL FIRE Deputy Chief Scott McLean. “We have 12 helicopters, we have 22 air tankers. All our aircraft is designed for that initial attack to combat these fires and catch them.”

Boulder Creek has their own fire department available as well, consisting of volunteers from the community that undergo a one year training program similar to that of a full-time firefighter. When the Boulder Creek fire, nicknamed the Bear Fire, occurred the volunteer firefighters combated the fire for two days, from Oct. 16 to Oct. 18. Thus far there are nineteen firefighters staffed in the department and there were four people who had experienced tackling a fire for the first time as a community volunteer.

As a resident in one of these at-risk areas, it is the resident’s obligation to clear “30-100 ft. from their property line… of dead and dying vegetation,” said CAL FIRE Public Information Officer Colleen Baxter.

Other regulations include keeping woodpiles 10 ft. apart and getting rid of overhanging tree branches.

Residents located within the California mountains or woods have the responsibility to maintain their property and are held to the standards of what is called defensible space. Under defensible space, residents are supposed to clear their property of all debris around their residence to protect the house and to prevent fires from spreading.

Inspectors gather information into a database, and cover 250,000 pieces of property a year. If there is a violation or two it will be logged and the resident will be given a ticket. They’re more or less fix-it tickets, and residents are given thirty or sixty days to fix the violation depending on the situation. If a resident does not comply by the third visit, they may have to go to court and could be fined.

Philosophy professor Jeremy Ball has been living in the Santa Cruz Mountains within the redwoods for 15 years. He lives in a similar area to that of the homes affected. Ball believes a fire, such as the one that occurred, was bound to happen. He cites overbuilding in more fire-prone areas such as a large amount of dead and sick trees, and lots of fire suppression as causes for the large scope of the fire.

According to Ball’s observations, rangers have done a good job of doing controlled burns within wild and state parks, but a lot of the Santa Cruz mountains are outside of the parks, in inaccessible areas, or in areas dotted with homes. It used to be that lightning strikes would cause fires that would go a great distance, burning much of the fire’s natural fuel.

However, Ball feels that nowadays too much debris has accumulated and that the area has become a “tinder box”. He explains most of the residents are panicky about the fire hazard, and he takes lots of time during the summer attempting to clean up his property.

Redwood trees are quite fire resistant to a degree, and older ones show charred marks on their trunks a series of low burns that have come their way in the past. These natural fires burn dead trees and brush, allowing the forest to flourish.

“The problem is that since there’s now so many homes that are littered throughout our Redwood forests,” said Ball. “There isn’t sort of that natural fire that used to move through the forest and clean out all of the debris.”

McClean states that homes do not impede on their [CAL FIRE] ability to conduct fires meant to control debris, since CAL FIRE educates the public on what to do to prevent or slow a fire near their property. But more and more homes are being built in the foothills and mountains than ever.

These differing views call into question whether more homes should be built in areas that are more fire prone, and whether residents still have much to fear from fires even with all the precautions and defenses in place.