I pledge allegiance to the AR 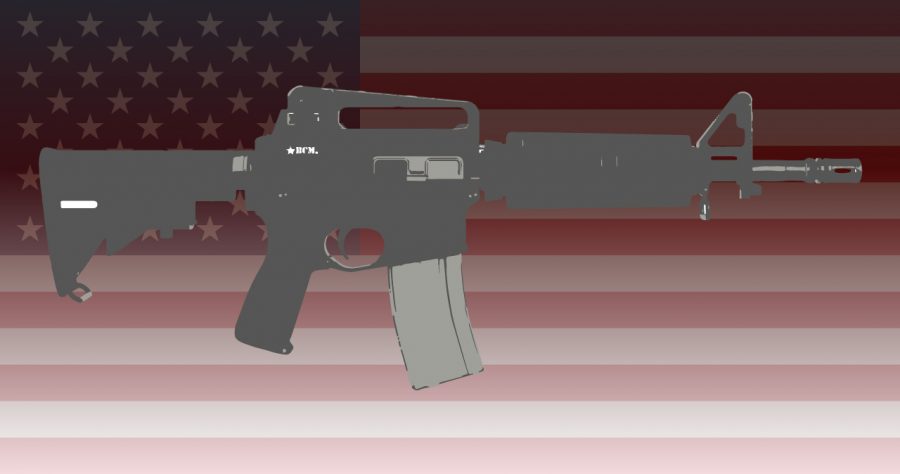 The United States is one of the only countries in the world that has had more mass shootings than days in a year.

The Gun Violence Archive and the FBI define mass shootings as, “FOUR or more shot and/or killed in a single event [incident], at the same general time and location, not including the shooter.”

It seemed that last year on June the deadliest mass shooting in history had happened with a death toll of 49 in Orlando, Florida but things have changed for the worst.

On Oct. 1st, 59 people were killed while 500 were injured at a concert in Las Vegas, Nevada. A 64 year-old man shoot at Jason Aldean country concert through a hotel window from across the street, making this mass shooting be the deadliest the United States has ever had in history.

“It hurts everybody,” said a student of skyline college, Briane Coreas who shares her thoughts about the recent mass shooting.

When was the fire ignited?

According to Smithsonian newspaper, Howard Unruh’s “walk of death“ in 1949 was the first “lone wolf” type of modern mass murderer. Unruh killed 13 people and injured three as he was walking in his neighborhood in Camden, New Jersey.

“Unruh was an early chapter in the tragically -all –too familiar american story of as angry man with a gun, inflicting carnage.” Patrick Sauer said in his article “ The Story of the First Mass Murder in U.S. History”.

The amount of mass murders that this country has witnessed since the early years is tragic. Numbers just keep on rising without a break. The multiple count of mass shootings lead the news to report on those with the most death count nearly all the time.

Where does the united states stand in relation to the rest of the world?

“Between 1983 to 2013, 119 mass shootings took place around the world. Sixty-six percent were in the U.S.” The Salon newsletter stated.

The rest of the world doesn’t have as many mass shootings as the United States, even when the statistics are combined.

In the year of 2015 , the count of how many mass shootings reached up to 375 in the United states only according to gun violence archive. That is at least one per day. Mass murder by a gun is becoming one of United States’s trait. It is not a positive thing to be recognized for especially for the land that has “life , liberty and the pursuit of happiness “ written in the constitution, while bodies are dropping by the hand of other Americans. A deadly cost for freedom.

These numbers of mass shootings are of different types. From schools, to streets, to mall shootings, that have happened in the past. The locations where these mass shootings occurred have limited similarities.

What is being done to stop these shootings?

“Although some Democrats in conservative states have been known to oppose gun controls, the main drive against them comes from Republicans, who now dominate Congress.” the Independent news said.

The confrontation and different ideals between the political parties detains gun control legislations to be passed by the senate.

Several states like California have taken gun control to their own hands by passing a few laws. The law center to prevent gun violence states that “Requires all firearms purchasers to obtain a Firearm Safety Certificate, after passing a written test; Regulates gun shows in a comprehensive manner; Gives local law enforcement discretion to deny a license to carry a concealed weapon” and a couple of more.

California also has specific laws on gun control for school zones. For grades k-12 they forbid a person from possessing a gun in a place when the person is fully aware that it is a school zones. It is also “require that concealed weapons license holders obtain written permission from authorized school official before carrying firearms or ammunition onto the ground of k-12 , colleges and universities.”

It is possible to carry a gun in school ground which makes colleges and universities more vulnerable to mass shootings but a permission must be obtained and authorized by specific official. But most of the mass shooters just bring guns to the school ground without following these laws

Which one are the most common in the United States?

Independent news stated that the most common and deadliest type of mass shootings occurs in primary, high school, colleges and universities.

“Since 2013, there have been over 200 school shootings in America — an average of nearly one a week.” everytownreaserch.org stated. They also said that “ this is just the tip of the iceberg”

Those are the numbers of mass shootings, it is not including single gunshots nor shootings that have no casualties or injured students.

What is the motive for these shooters?

“A great deal of research , however , suggests that behavioral scientists just dont have a strong grasp on what drives mass shooting and violent rampages , or when they’ve increased in recent decades” said the Washington post.

With that in mind , researchers have some theories of why they are becoming more common. They think that the killing sprees might be contagious somehow.

“The Nature of Mass Murder and Autogenic Massacre” states that previous shooters “have experienced challenging setbacks in important social, familial and vocational domains.” Some people that may feel this way might be vulnerable to the temptation of following the same path as an escape.

Although Everytown.org did an analysis which stated that a numerous amount of shootings in high schools , universities and colleges erupted after a confrontation.

These reports and theories not only suggest that some shootings are planned while others aren’t but that “Many of the students who perpetrated these shootings had easy access to guns at home”.

Nobody knows the next mass shooting location, yet Stephanie Martins a student at skyline college feels safe and said “I’m here and nothing has happen.”