The Skyline View • May 5, 2017 • https://www.theskylineview.com/news/2017/05/05/new-campus-technology-implemented-for-lectures-to-be-recorded-and-available-online/ 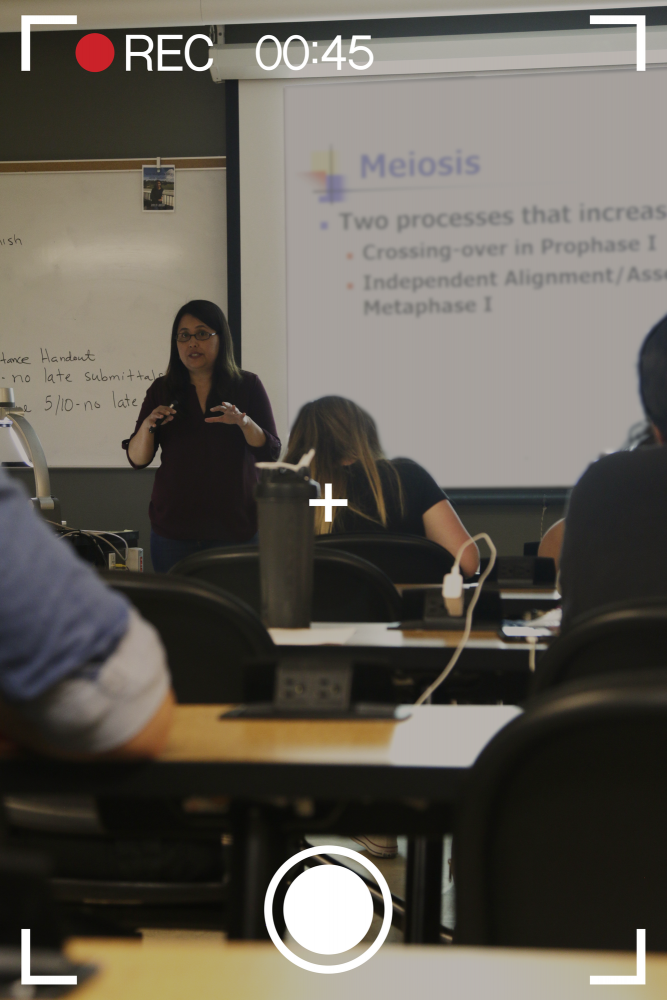 Skyline will soon be testing a new video camera system that will record lectures and make them available to students digitally.

The revolutionary system is called Lecture Capture and consists of a microphone attached to a lanyard around the professor’s neck and an iPad attached to a C-series robot that will track the teacher’s motion throughout the classroom. A Swivl camera will also be positioned directly in front of the teacher.

James “Jim” Houpis, dean of Library Technologies at Skyline, said that school has acquired 10 of these devices and hopes to implement them on campus soon.

“It videotapes the professor, both audio and video and then it can be posted on Canvas,” Houpis said. “So if a student didn’t get everything, they can watch it again on Canvas.”

Lecture Capture’s newest feature allows time stamping, letting students pinpoint the moment of the recording where they might need clarification.

The service would be most useful with ESL classes where confusing jargon might be used and repetition would be useful. It would also be useful in science classes.

Other schools like Cal State-East Bay (CSUEB) where Houpis previously taught, have successfully implemented the system by installing the cameras permanently in classrooms.

CSUEB’s version of the program is called East Bay Replay and it received rave reviews from students via an anonymous survey conducted by the school.

“Some of us are parents and most are commuters,” a student said anonymously. “Missing a class can create anxiety, especially if it meets once a week [but] I prefer to be in class [and] if something comes up, it’s the next best thing.”

The only difference between CSUEB’s and Skyline’s version of the recording system is that Lecture Capture will be upgraded from a fixed device to a Swivl camera that tracks the teacher.

The recordings will be hosted on the school’s website and will be downloadable to any device. Students will also have access to previous lectures from the entire semester.

Since Skyline will have only 10 of these systems, they will have to be checked out and priority will be first-come first-served basis.

The Swivl systems will be arriving on campus any day now and all Skyline needs are teachers who are willing to test them out in their classrooms.

Mustafa Popal, a social sciences professor’s concern is that if lectures are made readily available, students will not make the effort to attend class. But a survey taken at CSUEB showed that East Bay Replay did not affect student attendance.

Popal will be the first person to test out the new systems. “I think that’s amazing,” Popal said. “I want it in my class right now.”

He already records his lectures on his phone and makes them available online to students. The only requirement he has is that they continue to participate and come to class.

He also has some concerns about the logistics of a new system, as well as who has the power to upload the recordings and teacher autonomy. “I think there’s another level, too,” Popal said. “Will students feel comfortable about being part of that recording too?”