The “13th” reveals hidden reality for people of color 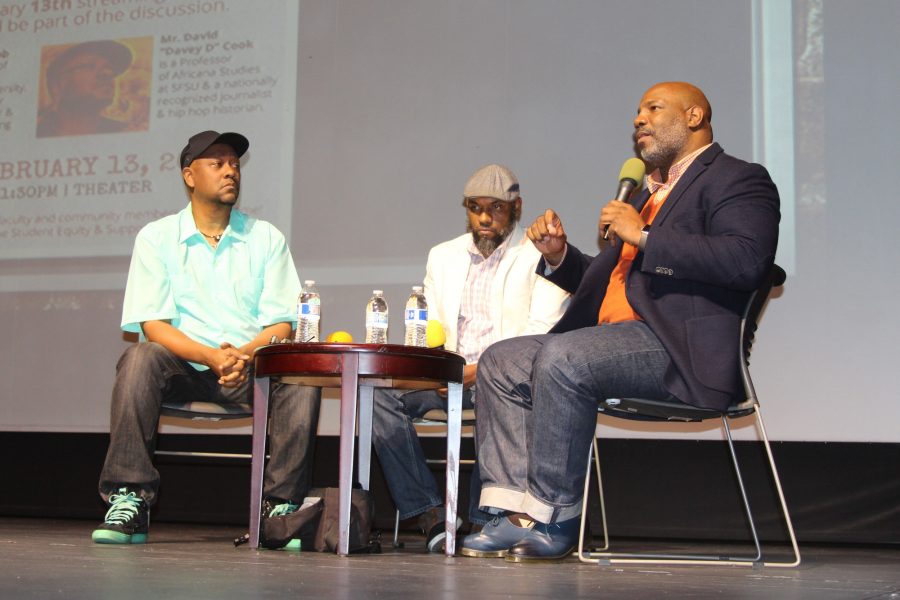 The Black Student Union hosted a panel on Feb. 13, in honor of African American Heritage Month, to discuss the mass incarceration of people of color and how racism and the criminalization of immigrants is caused by a loophole in the 13th Amendment.

Who’s affected by the 13th Amendment?

A new documentary, “13th,” was shown in snippets to give the audience a better picture of what is happening in the United States system of social issues including the mass incarceration of African Americans and Latinos.

The panel was moderated by Lasana O. Hotep, Dean of Student Equity and Support Programs at Skyline College.

Relevancy in the past and the 21st Century

After the first section of the film, David “Davey” Cook, professor of Africana Studies at San Francisco State University, highlighted what the film was doing by presenting to the audience the history of slavery and how it is “framing” the narrative of how the 13th Amendment relates to today. According to the Library of Congress website, the Amendment stands for being able to only punish those who are convicted of a crime through servitude.

“Neither slavery nor involuntary servitude, except as a punishment for crime whereof the party shall have been duly convicted, shall exist within the United States, or any place subject to their jurisdiction.”

With this particular Amendment, and the South’s cotton economy in “tatters,” Dr. Jelani Cobb, a professor of journalism at Columbia University, said. Cobb has appeared in the documentary and spoke about how it was difficult for the South to meet the quota of being able to survive without free labor.

In the panel Cook further explained that a loophole was found in order to restore the previous system by legally having African Americans incarcerated, to work as free labor, creating the biggest prison boom after the attempt of the Reconstruction of the South around 1876.

Cook and Cobb agree with the narrative of the documentary of why mass incarceration has become the norm in the years since then.

The Social Culture and Stigma of People of color

Cook explained that imprisonment has been normalized as a form of entertainment through documentary television shows focusing on prisons and who is incarcerated, namely African Americans and Latinos.

“When people see these marathon films, it’s almost justified,” Cook said. “We don’t think about jail above what is shown on these TV shows, so what’s missing in a narrative is the horrors that people experience once they’re incarcerated: beaten, raped and being there for long periods of time, families broken up and all these types of things … if you’re not experiencing it you may come to the conclusion that you have to find alternatives to jail.”

As the panel went on, the discussion was focused toward the research showing the mass incarceration of people of color.

The panel focused on Ava DuVernay’s perspective, the director that the legal system is flawed in terms of who goes to jail based on the crimes inmates committed. Since only snippets of the film were shown, in the full documentary it elaborates on the growing inmate population, from 357,292 in 1970 to 2,306,200 in 2014. This is due to activist groups such as the Black Panthers being closely followed by former President Nixon and President Ronald Reagan in hopes to crack down on crime, but focusing on these particular groups.

“We do not see between incarceration and crime,” Cobb said. “Were you to listen to the things being said in Washington D. C., especially things that are coming out of the Trump administration where they are saying that crime is at an all-time high, people should be afraid, people should be fearful and so on but in actuality crime is at a 47 year low.”

Towards the end of the panel there was a Q and A session, where the audience was able to write down their questions for the speakers to answer.

Cook elaborated on a real life example: what recently happened in Oakland, how the police were called on a few African American males for standing outside their house.

For one of the questions, it was asked about the recent events concerning the accuser of Emmitt Till, Carolyn Bryant Donham, who admitted that Till did not harass or flirt her but resulted in Till’s death. Cobb responded about how fear is deeply connected to the stigma of people of color.

“One of the people who he had shot asked him why was doing what he did and how they mean him no harm,” Cobbs said.

Roof, as Cobb relayed, it was because black men were raping white women and taking over the world.This explanation was one of many documented on video interrogation by the FBI used in the trial.

President Trump was another example, as Trump claimed that Mexicans were rapists, on record, during his presidential campaign.

The connection Cobb was trying to drive home was with these stigmas of men of color sexually assaulting women, these are the reasons used to justify racist actions.