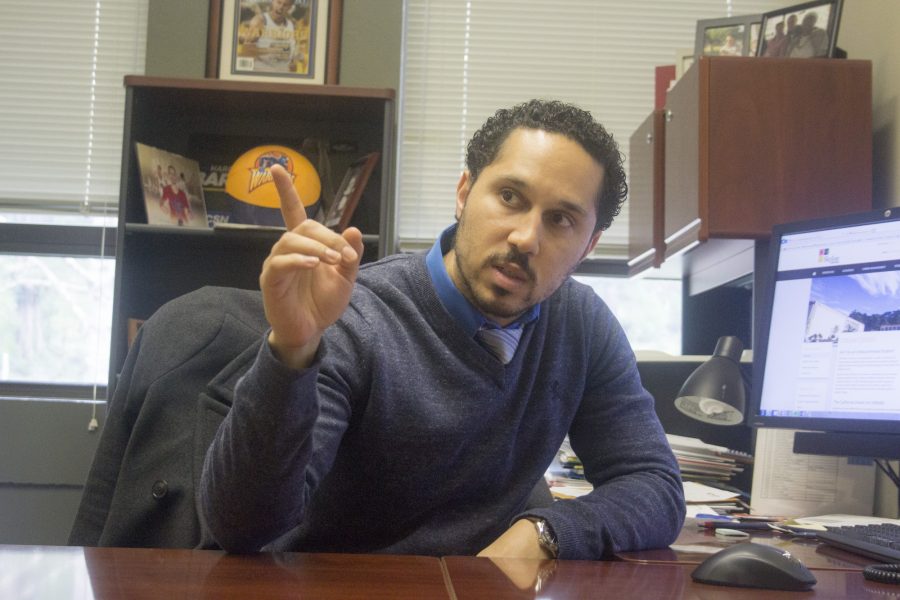 Chad Thompson, Interim Director of Sparkpoint and Career Services, talking about what the new DREAM Center offers the community as a whole. Photo credit: William Nacouzi

A DREAM Center opened on Feb. 1, to engage students in the topic of immigration. With the numerous petitions coming from the students, faculty and community, the SMCCCD is using references, professionals and meetings in the quest to be called either a Sanctuary or Safe Haven school.

A Sanctuary Campus would include keeping a safe environment for those who are protected under Deferred Action for childhood Arrivals (DACA) and others who are not. For the district, the requests from a group of students during a Board of Trustees meeting. A Sanctuary Campus would be for protection against Immigration and Customs Enforcement (ICE) and still be able to achieve their education without fear of interrogation, arrests and search based on their immigration status.

In order for the district to fully petition to become a Sanctuary District, research is being done based on articles from Inside Higher Education. In order for colleges to successfully become Sanctuary campus, they would have to separate themselves from the federal government even though it may affect the federal funding.

President Regina Stanback Stroud of Skyline College emphasized that students are more affected when it comes to government financial aid aspect when making the choice of becoming a Sanctuary Campus.

There are over 111 colleges so far in the United States who have been petitioned by students and faculty to become Sanctuary schools. Skyline is in the process of possibly becoming one as well or a Safe Haven.

If Skyline were to be called a Safe Haven school this would mean the school would still receive at least some funding and will follow certain Federal regulations.

Since the historic election of President Donald Trump, the district’s students and Board of Trustees have come together to establish a DREAM Center to support undocumented students. Based on the incident with Skyline Campus Safety back in November 2016, Alfredo Olguin Jr., a Skyline student and other students from the District’s campuses presented a list of requests during the Dec. 10, 2016 Board of Trustees meeting to make the campus a safer place.

The district’s Board of Trustees and Skyline staff are working together with students and Dr. Angela Garcia, Vice President of Student Services, to enhance student’s experiences, offer free legal advice and safety based on the list. Unfortunately, Garcia was not able to be contacted in time for an interview.

Stroud commented on who the DREAM Center may affect the most.

“We may end up seeing some changes from what we what we saw in the support for the students from the Obama Administration,” said Stroud. “With students expressing concerns [about] what might happen not necessarily students who are undocumented but students who have any type of implications or connections to the Dream Act, or AB540 or DACA (Deferred Action for Childhood Arrivals).”

With AB540, certain students who have attended a high school in California for three or more years and also earned a high school diploma or GED, would be “exempt from paying nonresident tuition at California public universities,” according to the Skyline College guidelines.

The reason for the DREAM Center being located in the Sparkpoint Center is to give easy access to the Skyline Community and public resources, such as the Legal Clinic open every Wednesday from 6:30 to 8:30 p.m.

The Legal Clinic has been at the college for about two years and is there to offer free legal advice from Maria Gaudio, Paralegal instructor at Skyline College, and to support the surrounding community. Along with Skyline, Cañada College has a legal office that opened earlier this year.

Chad Thompson, Interim Director of Sparkpoint and Career Services stated that San Mateo Community College does not have a DREAM Center yet, but will have one in the future.

At the moment, the DREAM Center is still in the process of hiring a permanent staff member, though it is currently being manned by Flor Lopez, the Sparkpoint Coordinator, and other staff members until the position is filled. The hours of the center are 8:30 a.m. to 5 p.m. Monday through Thursday and Friday 8 a.m. to noon. However, the hours may be adjusted due to the correlation to the office hours of building 2. If you have any suggestions for the use of the DREAM Center, share them through a suggestion box located in the center itself, email the DREAM Center or come in to make the suggestion in person.