Oakland erupts in wake of election 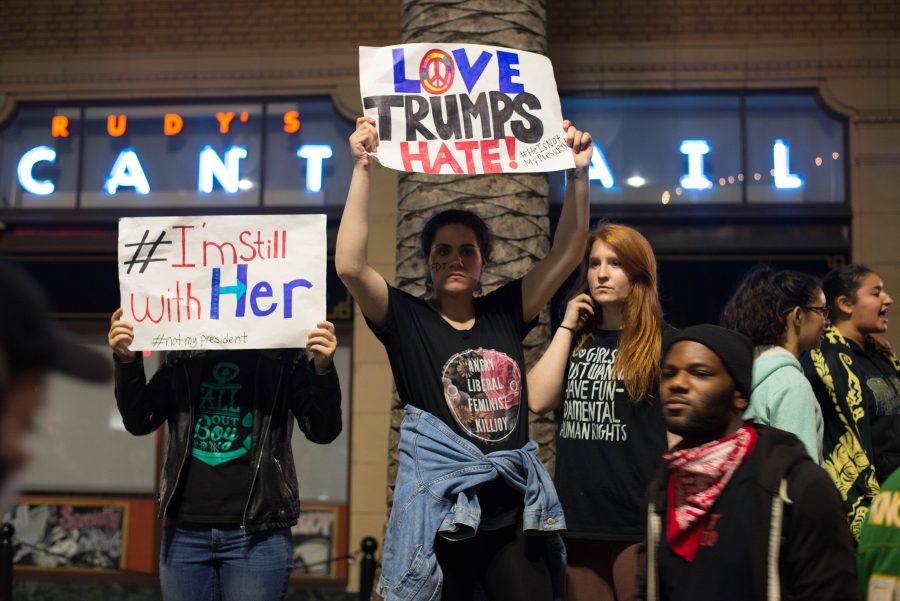 Oakland was calm on Thursday, Nov. 10, two days after the nation elected Donald Trump to be the 45th President of the United States.

The action of the night was situated on 19th Street, as approximately 7000 people marched through Oakland, according to ABC7. Broadway Avenue was lit up with red and blue lights as a barricade of police officers prevented protesters from loitering in the high traffic street.

In response, the protesters walked down another street, which led them to Telegraph Avenue. The police followed closely behind, from 19th Street down to 31st Street.

The protesters flooded downtown Oakland with their fists in the air, shouting chants, and holding posters with Trump depicted as the devil. Other signs included the words “Not My President” printed in block letters, sprawled out over pieces of cardboard.

There was an evident pain in the voices of the distraught masses as they shouted in solidarity: “Hey, hey! Ho, ho! Donald Trump has got to go!”

The protesters were more peaceful than they have been, though it was reported by ABC7 that several businesses were vandalized near 12th and Broadway. The damage is less significant than the damage that was suffered during the first round of protests on Wednesday, Nov. 9.

Smaller groups split from the protest on Telegraph Avenue, setting garbage cans on fire and breaking down a fence underneath the eastbound I-580 overpass, which led people to climb onto and temporarily block the freeway.

According to SFist.com, the Oakland Police Department declared the protest as unlawful assembly around 9 p.m., resulting in law enforcement agents using tear gas as means to calm down the crowd. Meanwhile, there were reports of protesters throwing M-80 fireworks at the officers Oakland’s California Highway Patrol branch tweeted that there had been two arrests made after the freeway was temporarily blocked.

Whether or not the protests dwindle down over the course of the next couple weeks remains to be seen.