Board of Governor’s Fee Waiver delayed 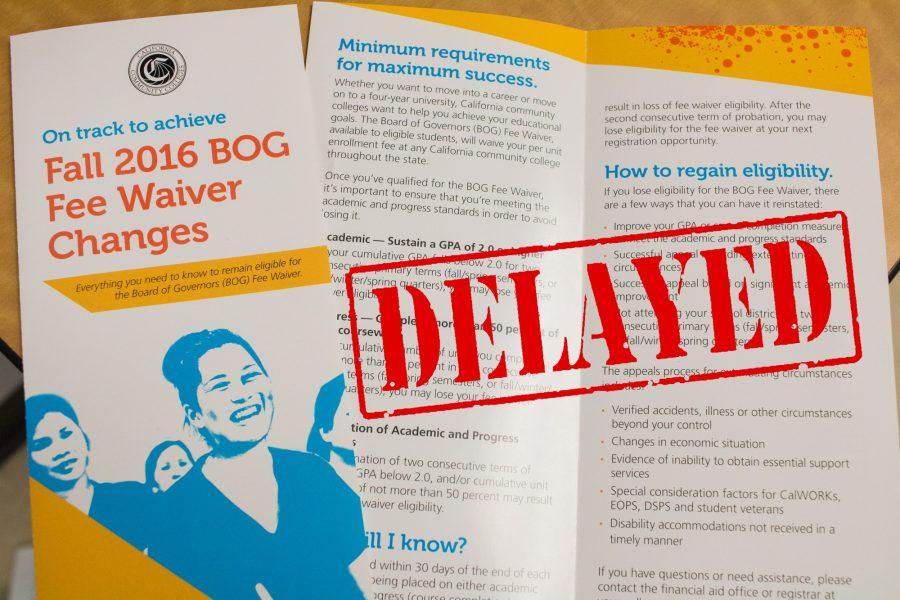 BOG Fee Waiver delayed due to new regulations coming into place for the next school year.

Students at Skyline, Cañada and College of San Mateo recently received an email from WebSMART stating that the Board of Governors Fee Waiver (BOGFW) would be delayed.

The email that was sent out states that the BOGFW will not be rewarded to students until the end of June. With this delay, students will not be dropped for non-payment of classes.

Some students are a little anxious about the long wait until June to find out if they qualify, due to many fragile financial situations.

Not everyone can pay for their classes independently. Skyline student Anjoe Devicais voiced his concern about the email that was sent.

“I’m worried about the delay because I am highly dependent on it. I’ll be happy if I get it, if not then I’ll be prepared for the worst, at least I know,” Devicais said. “I have other back up plans, if anything I can fall back on my parents for a last resort. I try not to depend on them but if I have to, then I will to get my classes.”

An addition was made that resulted in students becoming ineligible for the priority registration and/or BOGFW if placed on academic and/or progress probation for a combination of two consecutive primary (fall and spring) terms.

The loss of eligibility will be in effect at the first registration opportunity after such determination is made.

This makes a lot of students who are on academic probation responsible to pay for all the enrollment and class fees on their own.

Skyline student Jonathan Battaglia, however, doesn’t think this new change is unfair. In the past he would apply and be rewarded the BOGFW, but now he pays for his classes out of pocket because he works 50 hours a week.

“As a student, if many of us are working 40-50 hours a week to pay for an education, if we’re not getting the waiver after we fail consecutive courses then I almost feel like that’s fair,” Battaglia said. “If you’re continuing to pay or get assistance and you keep on failing either you’re not taking it serious enough or you need to change your lifestyle or your study habits.”

Cherie Colin, Director of Marketing, Communications, and Public Relations for Skyline College, mentioned previously that Skyline has been notifying students since the spring of 2015, to give them time to improve on their Academic Standards standing. Students who lose the BOGFW would have to pay the expenses.

Skyline student Christopher Sagredos feels it is a little unfair, that students will sign up for classes not knowing if they are going to receive the BOGFW, but he understands why it will take a while.