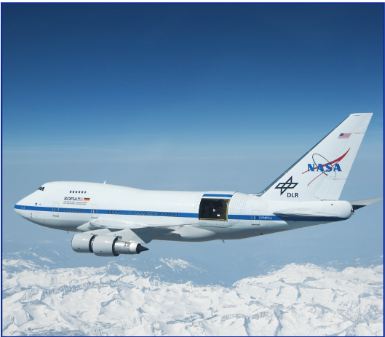 A photo of the Stratospheric Observatory for Infrared Astronomy (SOFIA) Boeing 747 that will be used during the mission.

A professor from Foothill College has been chosen to be a part of a NASA mission.

David Marasco, a physics professor at Foothill, will be joining 27 other people on a trip through Earth’s atmosphere.

Marasco went through what he called a “rigorous screening and selection process,” to be chosen for the mission and to be a part of the Airborne Astronomy Ambassadors program.

The mission will be completed on the vessel SOFIA (Stratospheric Observatory for Infrared Astronomy). It is a Boeing 747 that has been modified to carry a telescope. The telescope looks at infrared light, and can see through clouds of dust. However, the infrared light is absorbed in water vapor, so the crew will fly above the terrestrial water vapor layer to make their observations.

Public Affairs Officer for SOFIA, Nicholas A. Veronico provided more information about SOFIA and how the telescope functions.

According to a fact sheet provided by Veronico, “the observatory gets above more than 99 percent of the atmospheric water vapor and other infrared-absorbing gases, thereby opening windows to the universe not available from the ground.”

“We will be trying to unlock some of the secrets of the universe,” Marasco said.

In another report provided by Veronico, the program is broken down as an opportunity for educators to get hands-on experience in obtaining information to bring back to students.

According to an update from Veronico, the SOFIA Program Executive at NASA headquarters in Washington said that, “the Airborne Astronomy Ambassadors program gives science educators a unique opportunity to interact with all facets of a NASA science mission.”

Marasco is looking forward to the mission, for the excitement it fulfills in him and for the opportunity to bring his findings back to the classroom.

“This is NASA; this is outer space,” he said. “It’s all wonderful and exciting.”

Marasco spoke about growing up in a time where man had already landed on the moon and everyone wanted to be an astronaut. Now he gets the chance to work with NASA on something he believes will bring changes to the classroom.

“[This] ties into that childhood dream,” Marasco said.

“This is what you can do with your knowledge later on,” is the message he hopes to send to his students through this experience.

The mission is intended to start in the fall, and in the meantime, Marasco is preparing for the trip.

He has had online meetings and is taking a graduate class in astronomy. He has also spoken with the rest of the crew over the internet, but hasn’t met many face-to-face yet.

The primary emotion and expectation for Marasco is excitement. He is excited to learn things and take them to his classroom. He also believes that as a professor, it is his job to make people excited about science.

Skyline Assistant Professor of Physics, Adam Windham, spoke about how he inspires interest in the classroom.

“Whenever possible, I try to bring demonstrations into the classroom to physically illustrate the topics that we’re discussing in class,” Windham said. “For some topics, this is easy: launching a projectile, dropping a feather or spinning on a swiveling platform are all easy to do in front of a lecture.”

Windham also spoke about the thrill of the mission and its connection to the community.

“We are incredibly fortunate to live in an area with so much exciting research being done all around us,” he said. “The more we get involved with that research, and get our students involved, the better connected we all become to the organizations in our own communities.”