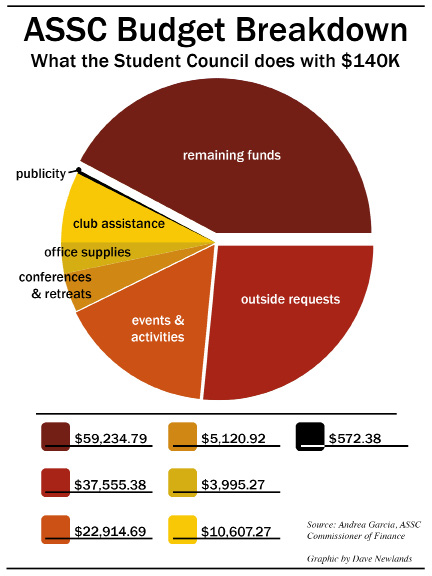 The Associated Students responded to perceived Skyline College Organization and Club Council budget issues, saying the budget is right where it is expected to be.

The report that the SOCC budget had dwindled to little more than $1,000 came from statements made at the March 25
ASSC meeting. This number is not reflective of the semester’s budgetary actions; however, this confusion was only fueled by the lack of ASSC information being posted for public viewing.

ASSC Commissioner of Finance Andrea Garcia said she keeps a close watch on the budget numbers and had urged the SOCC to do the same, but the number of clubs asking for funding this year has been higher than usual.

“Basically the whole first month of SOCC I went in and let them know how much money was in the budget, what I was doing, and just to be cautious about asking for money,” Garcia said.

“We didn’t expect this many clubs to be active this year and it’s really, really great. It just caught us a little off guard, but we obviously did a lot of work to figure it out.”

That work included preemptively moving money around to avoid budget shortfalls. Money was moved into the SOCC fund from the graduation, awards dinner, and scholarship funds in the amount of $1,000 each. An additional $500 was pulled from the vice-president’s fund, which is money that the vice president typically donates to a club, anyway.

“Before you get worried about it, scholarships we’ve always totaled up to $6,000,” Garcia said. “We’ve always had an extra thousand dollars to decide whether we wanted to increase the price of a scholarship, to create a new
scholarship, or to just leave that money there in case there was an emergency for some other reason.

Obviously we had to use the third option, but every scholarship that the ASSC gives is still going to be given completely, so that will not be affected at all.”

As for the awards ceremony and graduation funds, those are not funded by ASSC, but a certain amount of money is earmarked to contribute if it is not needed elsewhere during the year.

“You look on the Skyline website and you see this huge gap that’s like blanked out,” ASSC commissioner of public records, Ryan Sherlock said. “It’s simple really. I think every commissioner of public records has their way
of doing it, but the reason why is because I’m busy correcting any past mistakes on the minutes. So I just only started recently going over them and re-correcting thoroughly… and that’s why its been taking so long.”

While minutes and supplemental information does not need to be posted at a specific time, the Brown Act regarding open meetings requires agendas to be posted publicly before meetings are held so that the public is informed
about topics being discussed or voted on, and can prepare comments if they wish to make any.

“(Agendas) are supposed to be posted at least 72 hours before the meeting,” Garcia said. “So because we have our meetings on Tuesdays they have to be posted at noon on Fridays.”

Sherlock does make sure that agendas are posted on the door of the ASSC office by Friday, but with Building 6 only open from 8 a.m. to 10 p.m. Monday through Friday, that only really gives people 32 available hours to find
out the content of the ASSC meetings held at 4 p.m. on Tuesdays.

Online agendas would allow for 24-hour access and public input.

Sherlock said that the general public does not typically attend ASSC meetings.

“It’s mostly the clubs that come around for special presentations and funding requests which we mostly deal with,” Sherlock said.

While the public may have a difficult time accessing this information easily, Garcia reports that the SOCC budget for the remainder of the semester is at $2392.73, which she expects to be sufficient.