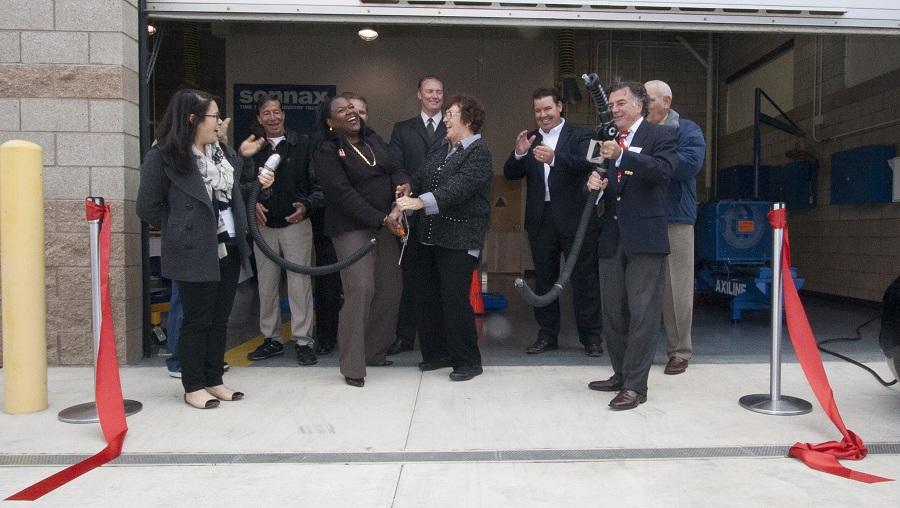 Skyline’s Automotive Technology department hosted a ribbon cutting ceremony and lunch Monday Oct. 28 to celebrate the opening and installation of the Electric Vehicle Charging Infrastructure on campus and throughout the community college district.About a hundred of observers, including San Mateo County Community College District (SMCCCD) board members, Skyline faculty and students, and those closely tied to the Electric Vehicle (EV) Project enjoyed a barbeque lunch by Pacific Dinning before speakers addressed the crowd.Skyline President, Dr. Regina Stanback-Stroud, spoke to acknowledge those who had contributed to Skyline’s development with the EV Project, from grant writer Mike Williamson to Schneider Electric and the California Energy Commission whom donated the charge stations.”The EV charging stations are one piece of a larger college commitment to sustainability and environmental justice that includes facilities energy practices,” Stanback-Stroud said. “This past week the College Council recognized numerous members of the campus community for their work on sustainability, and completing the first Skyline College Sustainability plan- one of the few among California Community Colleges.”Stanback-Stroud shared that having held the ceremony in the Automotive Technology department, where one of the charging stations on campus can be found, had additional meaning to it’s location. Skyline wanted to “highlight how responsive the college is to educating students in these new technologies”, and that “the Automotive Technology program has developed training in both hybrid and EV technologies and proudly owns a number of hybrid vehicles for student learning.”On Aug.13, a grant was received for the EV project and a total of 11 have already been installed throughout the district, five of which are at Skyline, and allows for up to four hours of use per vehicle. Since their debut, 475 vehicles have used the EV charging stations, but a ribbon ceremony had been delayed in order to make any needed adjustments.”We had one small challenge initially with the web reporting component but that ironed out quickly,” said Director of Maintenance & Operations Karen Powell. “You can now track from your charge point card charging stations which are available, and the system keeps track of how often it’s used, how many kilowatts are consumed, and what percentage of time they are actually being taken advantage of by the public.”Students are also pleased with the direction the district, and Skyline specifically, has taken to offer the EV charging stations to students.”I am actually really interested in the change from depending on foreign oil to becoming a more independent country, relying more on electric vehicles and other forms of propulsion vehicles,” automotive student Ryan Crane said.A rally of EV vehicles followed one another after the ceremony at Skyline to the other campuses in the district for their ribbon cutting ceremonies.