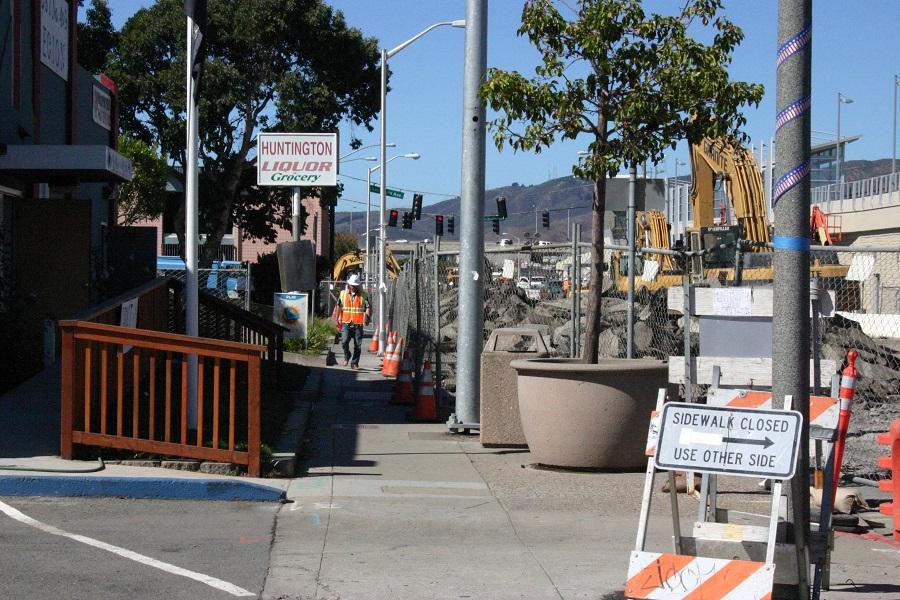 The corner of Huntington ave showing a part of the detour and the ongoing construction on the right.

San Bruno Ave is currently closed for a 10 day construction of an elevated train track for a Caltrain project.

“This is a multi million dollar project that is funded by the city to raise the train tracks over three streets in San Bruno and one of the things they are doing is lowering the streets to provide clearance for the vehicles that will be going under the tracks.”

While this construction is going on the traffic has been detoured around San Bruno Avenue. The area surrounding the construction has detours into certain streets, specifically Huntington Ave. and San Bruno Ave. There is a liquor store and other businesses whose parking lot is being used for pedestrians to walk through.

The businesses in the neighborhood feel that since the construction has begun they have seen less foot traffic and business is slow.

“Since the construction, there has been less carry out customers and more deliveries being made.”

He also said that, ‘this construction is a good thing because the train will not interfere with the traffic of cars which will be safer for people who drive in the area.’

For the time being Rios also mentioned he has to take a longer route because of the construction.

A local neighborhood liquor store employee who asked to not be named said,

“I started working when the construction began two days ago and business is very slow, the area is gridlocked.”

The construction site is obviously under extensive work, pedestrians are able to see workers changing the landscape of the city. These workers are also directing traffic and ensuring that motorists are aware of the detours.

On Sunday night, at around 8 o’clock, construction for Caltrain San Bruno Ave was stopped due to a struck gas line.

According to Jason King, a spokesperson at PG&E,

“There was a 2 inch steel gas line that was struck while Caltrain construction crew[s] were working to elevate the tracks at the intersection of San Bruno [Ave.] and San Mateo [Ave.] in San Bruno.” he said. “[Caltrain] did call us immediately to get a crew out to the scene to ensure the gas was moving safely.”

King explained that in order to stop the flow of gas they had to excavate through the concrete and “squeeze out the gas with a giant pincher like device.”

“We had that completed by 1:08 a.m. Monday morning.” said King. “There were no evacuations in the area, we just had to repair the pipe and patch the road.”

So far there have not been any new accidents concerning the project. San Bruno Ave. will re-open to traffic on Sept. 30. The Caltrain project is set to be finished Spring 2014.