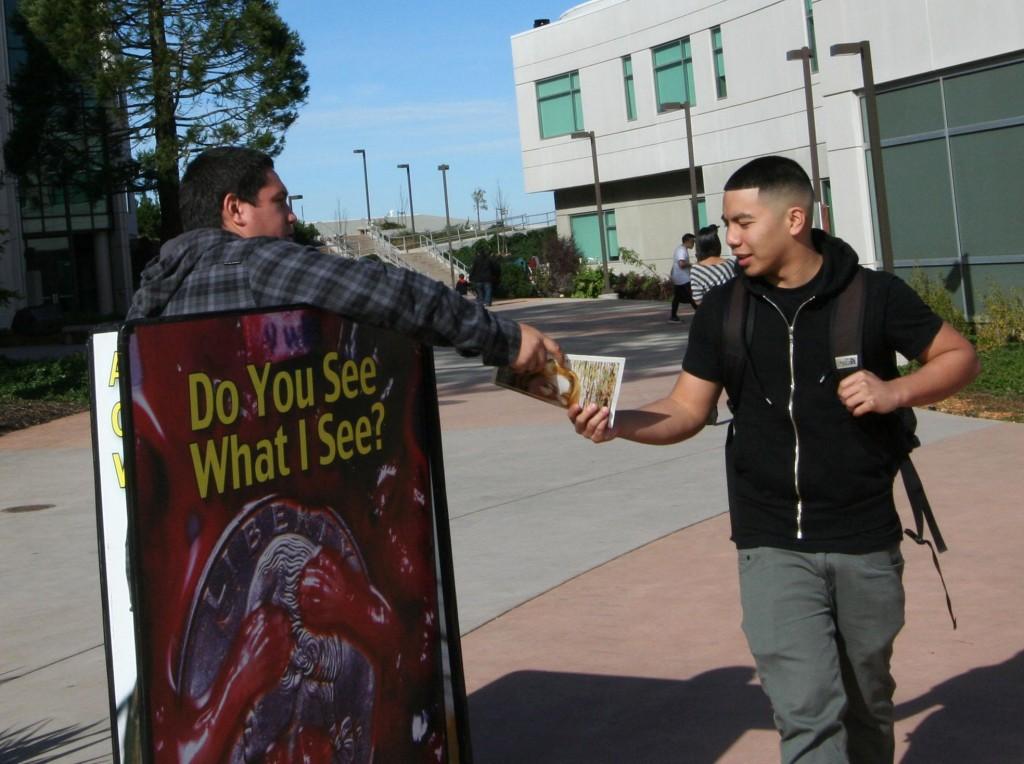 A staff member of the anti-abortion group, Survivors of the Abortion Holocaust, hands out literature to a passing Skyline student. (Denise Juarez)

An anti-abortion group handed out literature and held up large signs with photos of aborted fetuses in the quad today.

The group, Survivors of the Abortion Holocaust, from Riverside, CA, claims that the photos are accurate and not photoshopped. They were blown up to show the intricacy of the developing fetus, said current group leader Ashley Colantuono.

Many students felt the images were too graphic to be shown, including one photo in particular that showed the head of an aborted fetus of the third trimester being held by surgical tongs.

“I really didn’t want to see it because I have a young’ un on the way,” said Deon Hamilton.

Another student, Peter Abdosh, said he thinks it’s good to teach women considering abortion what abortion is really like, but he said he preferred the photos be shown in a book or pamphlet, as opposed to being blown up out in the open.

Against opposition, the anti-abortion group held its ground, saying it was a matter of free speech and that they had a right to be there and show the photos.

“Throughout history, the use of graphic pictures have been extremely powerful,” said Colantuono when explaining why they chose particular photos.

Coordinator of Student Activities Amory Cariadus confirmed this, saying that Skyline could not restrict the use of graphic photos because of current laws, even though some students complained. The group filled out a free speech permit prior to their event, as Skyline requests outside groups to do, even though it is not required.

“Because we are a state and federal institution, we are bound by their laws and we have to allow [groups] to share their information,” said Cariadus.

Cariadus went on to explain that free speech groups can only be asked to leave if they disrupt class, block pedestrian traffic, incite violence or protest inside buildings.

Some students agreed with the group’s display and felt that the graphic nature of the photos was appropriate. One such student is Jenna Balingit, who said that women who want abortions should know what it really looks like.

“They caught my attention,” said Balingit. “It was kind of disturbing. I think it’s appropriate.”

The literature the group passed out contained stories and information about abortion, birth control and pregnancy. It did not include photos of aborted fetuses.

Survivors of the Abortion Holocaust formed their group in the late ‘90s, and they have been traveling to colleges and high school campuses nationwide since 2000, said Colantuono.