Emotions run high at “Speak Out” 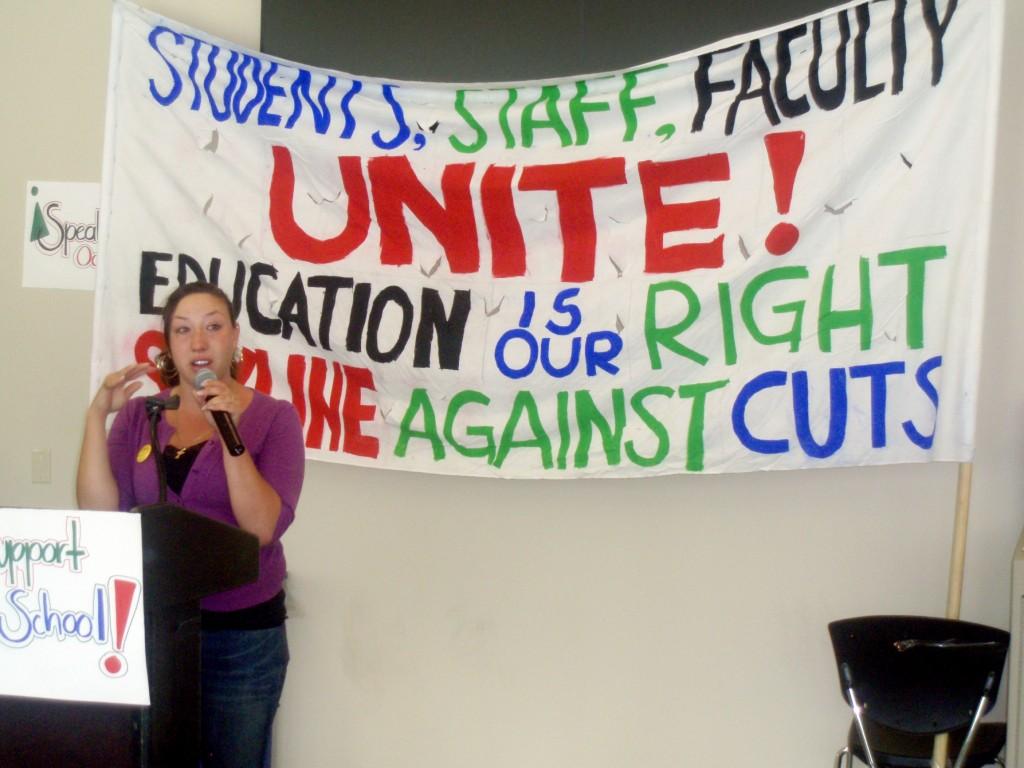 Students gathered in the Skyline cafeteria on October 7th for the “Speak Out” assembly, which took place from 11:00 am to 12:30 pm, where different guest speakers from students to faculty members, came to talk about their experiences with the budget cuts.

Many guest speakers expressed that their views and opinions regard­ing the budget cuts represent their emotions regarding the financial cuts as well.

One such moment was when Vice President Amanda Parker broke down in tears during her speech when talking about how the budget cuts have negatively affected students.

“I’ve utilized the programs of CalWORKS, Trio, EOPS and I know that they’ve suffered massive cuts,” said Parker. “It’s because of them I’m at where I am today, and it’s painful to know that there are students coming in who are in the same position I was–who won’t be able to utilize those services the way things are going now.”

During her speech, she briefly mentioned how it hurts her to know that the Child Care Center was at risk of being completely cut, and knowing that some mothers might not get the chance of pursuing an education.

She also expressed her opinions of students, especially here at Sky­line, who still haven’t registered to vote, and emphasizing the impor­tance of making your voice heard.

“It’s painful to see some of the programs being cut because students aren’t voting that’s why we are here today to encourage students to regis­ter now,” said Parker. “I think we are all role models by trying to spread awareness, I mean that’s the biggest part reason for being here.”

Harer joined the assembly with her views on the reality of how many teachers are suffering right now.

“We’re trying to get better work­ing conditions, and some form of pay raise to help teachers, both full and part time.” said Harer.”The truth is you may not see your teachers because they might not have jobs here anymore. These teachers are hurting financially just as much as you guys are.”

Although she never gave out any specific names during her time on the podium, she did share with the audience examples of how teachers here at Skyline have had their lives changed dramatically due to cuts.

Harer also delved into her per­sonal life as a teacher when she shared that she herself had to switch from a health care provider that she’d been seeing for 15 years because she could not afford it anymore.

Another teacher present at the event was Masao Suzuki, an eco­nomics professor here at Skyline, volunteered to speak mostly in order to shed some knowledge on the cur­rent economic climate.

“I volunteered to speak because I spoke at the “teach ins” last fall about the budget situation, and the cut backs to education.” said Suzuki.

“So this is one of my area of expertise, the state and federal budget, and what’s happening with the economy and how it’s affecting Skyline,” explained Suzuki.

“There has been a very serious recession that has led to a fall in revenues here in California,” said Suzuki, “and at the same time there have been a series of tax cuts mainly for corporations over the last ten years, and these two factors have re­ally slammed California budgets.”

Suzuki also talked about how his father, a World War II veteran, has been denied medical care as an example of how people from all walks of life are being affected by California’s current situation.

Hoffman, too, expressed his sympathy towards the students and fellow faculty, speaking on his own experience with being a new teacher in this district.

“I feel very passionately about the need to organize and educate around the budget cuts. I think we have to try and reverse the trends that are happening.” said Hoffman, “I think students got some important information today, and I think some of them learned of new ways to get involved. I think this was a reminder that there is still an anti-budget cuts movement.”

Hoffman also expressed the im­portance of things not continuing the way they are, as they are a reflection of us as a society.

“It relates to our standard of living,” said Hoffman, “and unless people can organize themselves and demand that resources go towards meeting our needs, these trends will continue. We will see an increas­ing gulf between the rich and the poor, and a large group of people living in poverty without access to education.”

Hoffman feels that there is little hope for us in the future unless cer­tain things are met in achievement.

“I am not very optimistic unless we see more people getting involved and getting organized,” said Hoff­man, “unless we see a movement,