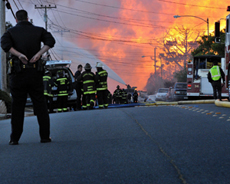 Skyline College campus has been deeply affected by the explosion and subsequent fires that overtook the Crestmoor area of San Bruno on September 9. Skyline students and faculty are feeling the weight of the disaster both on and off campus.

The blaze started when a gas transmission line exploded at 6:15 p.m. The resulting explosion sent flames and a cloud of grey smoke 100 feet into the air, lighting homes and trees on fire. Many San Bruno residents’ homes were not only endangered but destroyed, leaving thousands of people displaced or in temporary housing.

This was the case for Skyline student Adolfo Ochoa. When the disaster occurred, Ochoa recalls that at 6:40 p.m. the police came to his home to evacuate his family out of the area. They had no choice but to look for shelter elsewhere.

Often times in the face of events as destructive as the explosion and subsequent fires in San Bruno, neighboring communities offer support and palliative aid to all the people directly and indirectly affected.

After the fires had died down many San Bruno residents were still displaced, but they felt an even stronger sense of community.

One such resident was Skyline student Steven Kelly, whose great-grandmother’s home burned down. His great-grandmother, father and brother, though, were in Burlingame during the actual explosion.

The day of the fire was one that will forever impact the rest of his life—a calamitous situation turned into a cheerful event when student Steven Kelly was reunited with his father after having a relationship that was characterized by distance. Kelly added, “I never really knew my dad—he was never really around when I was growing up.” The fire was a way for Kelly and his father to reconnect after a long period. As Kelly put it, “sometimes it takes tragedy to bury the hatchet.”

The fact that Skyline College is only a mile away from the disaster site made it a cause for concern. Mike Celeste, director of public safety for the San Mateo Community College District, confirmed that the Skyline College campus was safe to be open the day following the fire. “At no time was Skyline in any danger,” Celeste said. The Skyline Department of Public Safety decided that instead of closing the campus, they should utilize Skyline’s emergency contact system to notify students about the disaster.

The fire may only have lasted the better part of two days but in that time it managed to destroy dozens of homes, displace hundreds of citizens and changed countless lives. But in the face of the disaster San Bruno residents banded together to donate blood, clothes, money and support for their fallen neighbors.