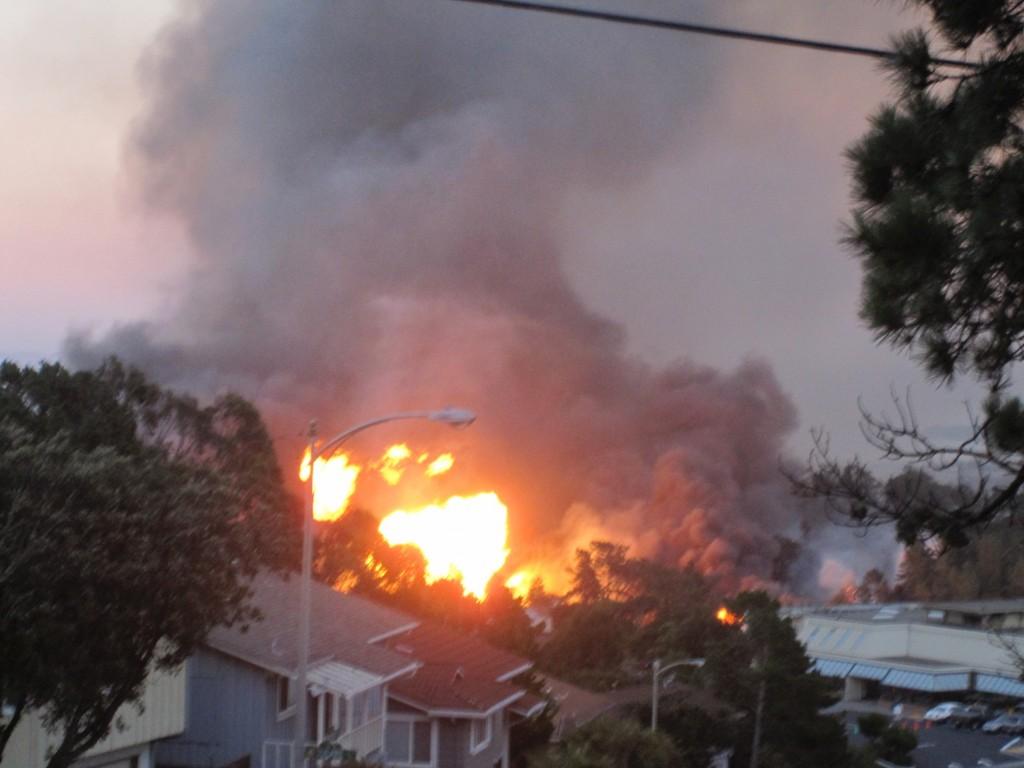 9/12 02:30 P.M. UPDATE: The Yeolaisah, a mostly Korean Buddhist temple just donated $500 to disaster relief. The collection came from various members. Member Dongho Sunim delivered it herself to the American Red Cross truck in Bayhill right after their Sunday meeting, they gathered the $500 during their Sunday service.

9/12 12:00 P.M. UPDATE: We have been informed that Milbrae and San Mateo 24 Hour Fitness are offering their showers to victims of the disaster, they are providing towels as well.

9/12 08:29 A.M. UPDATE: We are being told now that a small group of houses in the green zone will not allow you to stay, but you will be let in to get your things.

9/12 08:23 A.M. UPDATE: San Bruno residents in the disaster area should check the list on the bottom of our page. If your house is in the “Green” Area you can return. If you are in the “Yellow” zone you can get some things and get out. If you are in the Red Zone you will NOT be allowed to return at this time. PG&E Officials will meet residents at their homes in the zone. You can then go to Skyline College’s parking lot M to check in and must provide a valid ID. This check-in station will be available from noon to five.

9/12 08:05 A.M. UPDATE: San Bruno residents will begin to be able to return to their homes today. We will post more details about this as we get them.

9/11 06:55 P.M. UPDATE: We have tackled the technical difficulties and updated the list of housing damage in the area with a brief explanation of the damage levels which was provided by the City of San Bruno. As such the old table has been deleted as more information was released.

9/11 06:28 P.M. UPDATE: We are experiencing technical difficulties with this article, we are trying to address them as quickly as possible.

9/11 11:27 A.M. UPDATE: We have received a list of three of the four known fatalities from the coroner. The known deceased are as follows: Jacquelin Grieg Age: 44, Janessa Grieg Age: 13, and Jessica Morales Age: 20.

9/10 07:22 P.M. UPDATE: The City of San Bruno has released details about the extent of the damage, while still bad they are not nearly as catastrophic as early numbers. Please check the table at the bottom of the page for information.

9/10 03:27 P.M. UPDATE: Multiple news organizations are now confirming the story that Joseph Ruigomez, a Skyline Student, is in critical condition after the disaster.

9/10 01:35 P.M. UPDATE: Patch.com is saying that Joseph Ruigomez, a Skyline Student is in critical condition due to the explosion. We are currently investigating.

9/10 12:04 P.M. UPDATE: The young woman who was thought to be a Skyline student is Jessica Morales, who is friends with numerous Skyline students and was contemplating attending here.

9/10 11:56 A.M. UPDATE: We have added more information to the bottom of this page with where you can donate blood and possibly get ahold of family members you’re having trouble reaching.

9/10 11:49 A.M. UPDATE: We are now able to confirm that the victim who was thought to be a Skyline Student was not a student of Skyline via her facebook.

9/10 11:44 A.M. UPDATE: We are receiving conflicting reports that one of the deceased is a Skyline student but we are unable to verify at this time.

12:21 A.M. UPDATE: ALL SAN BRUNO RESIDENTS ARE TO REPORT IN, REGARDLESS OF LOCATION. At least 3 dead confirmed by Coroner via KTVU.

Gasline explodes in San Bruno early tonight. 45 homes have been damaged and evacuations of residents in the area are voluntary.

Evacuees are being shuttled to Bayhill shopping center with the help of Samtrans busses. For any emergency information please call (650) 616-7180, though phone lines may currently be busy.

Those injured from the explosion are being taken to Kaiser Medical Center and San Francisco General Hospital.

According to CBS5 news FBI and Terrorism Task Force was reported on the scene, though currently no information is known.

According to Skyline President Victoria Morrow, Skyline’s Campus will still be open tomorrow though change to bus routes and road closures will be occuring.

Officer O’Donnell, the Public Information Officer for the San Mateo County Sheriff’s Office, said that over a 100 San Bruno residents have checked in at the Bayhill shopping center location. San Bruno has officially been declared in a state of emergency. There is no estimate of when the roads will be cleared, but they definitely will be still closed tomorrow so plan alternate routes ahead of time to Skyline based on the emergency.

If you live in San Bruno and need shelter:

If you’re interested in donating blood, please go to http://www.redcrossbayarea.org/

If you’re trying to get ahold of someone please go to http://www.safeandwell.org