Trojan’s learn to adapt from Loss 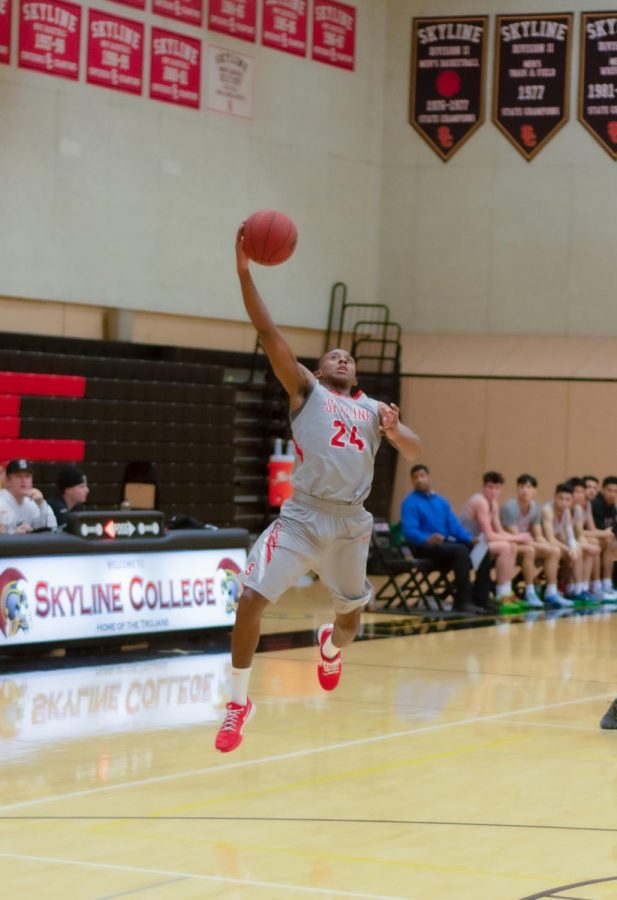 Skyline College Men’s basketball team lost 87-69 against Chabot College in their first meeting of the season on Wednesday, January 15. Chabot college was on fire on 3-point shots hits made seven as total in the second half, Chabot player Japjit Gill made five three-pointers in the second half giving his team a comfortable lead.

Throughout the first half of the game, Chabot used full court pressure on defense while Skyline didn’t score at often, the team had great ball movement along with a good amount of transition on the set play. Elijah Flowers, who was the starting shooting guard, hit his first two 3-point shots and finished with a total of 12 points. Colby Vazquez, the starting shooting guard, was on fire with multiple drives into the lane for layups and jump shots. Vazquez had 16 points which helped Skyline hold the score from Chabot as they lead by one, 39-38.

However, in the second half, Chabot started to exert pressure on the Trojans on the defensive side making the Trojan shot selection difficult. Plus, Chabot denied Skyline’s ball movement causing some turnovers on offense. In the first ten minutes of the second half, Chabot pulled the score with 28-15 run, the Skyline was down by 12 with a score of 54-66. Additionally, on offensively, Chabot changes the pace of the game. The team accelerated the speed of ball movement which created multiple wide-open shots opportunity as the team hit a total of 10 three-pointers.

Compared to the competitive first half, Skyline allowed Chabot to score 49 points. Regarding this, Justin Piergrossi, the head coach explained the struggle they met in the second half.

However, due to the defense pressure by Chabot, Skyline couldn’t get further on the scoreboard, their ball movement was slower than the first half. In connection with the offensively, Piergrossi expressed the game strategy used by Chabot was changed differently between first and second half.

Skyline as the young team, which only has one sophomore in the team, Sophomore guard Noah Haynesworth gave his thoughts of improvement that the team can strengthen going further.

“Just from mentality, I think in the beginning of the season, we’re a young team, Chabot is a really good veteran team,” Haynesworth said. “They have a lot of sophomores. They know how to play 40 minutes of basketball and I think they did that best.“

Colby Vazquez the freshman shooting guard scored a team-high 22 points believes that more could have come from his team during the entire game.

“We gotta stick with what we know and keep up the energy throughout all 40 minutes, we can’t have it just in that first ten minutes. We got to have it throughout the whole game.”

Regarding Colby’s performance, the head coach gives the players affirmation.

“He did a good job handling their pressure. They (Chabot) tried to take Walter away by denying Walter the ball. So Colby had to dribble and handle the ball a lot more than usual. I thought Colby did a really good job of handling that pressure.”